I’m sorry for the radio silence over the past week. When we decided to go away for a couple of days, I chose to take a weeks holiday from everything, including blogging and Slimming World. I have to admit I missed writing terribly. The whole time I was away, I was making mental notes on how to describe our trip. I’ll write more about how I found the break from Slimming World on Friday (after I’ve weighed in eeek!), but for now I want to tell you about our trip to Moonfleet Manor.

You may remember, a few weeks ago, I talked about holidays and more specifically holidaying with my toddler. If you missed that one you can read it here. Anywho the crux of the post was that we decided to take a leap of faith and try out a very different holiday for us. One that we hoped to speak to all our needs.

Which is how we found ourselves zooming down the A3, towards Weymouth, last Tuesday morning.

We had chosen (on recommendation of a friend) to try out one of the chain of Luxury Family Hotels. They have eight properties dotted around England, all of which look like grown up country hotels, but which place equal importance on the needs of all their guests, whatever their age. We chose to go to Moonfleet Manor in Weymouth partly because of personal recommendation (thank you again Michelle) and partly because it was no more than 2.5 hours away. We often travel to see family in Devon, which at 4.5/5 hours really is pushing the boy’s (and our) limits of how long he can stay in the car, so 2 hours sounded just right. As it turn out the journey there and back passed without incident and we timed our departure to mean he slept for most of the way for both trips. Bonus!

We arrived before check in, but were made to feel welcome straight away, being shown into the garden and supplied with lunch. And this set the tone for the rest of the stay. The staff couldn’t be more helpful and no request was too much. When we realised we’d left Oscar’s bottles at home for night time milk, we tentatively asked reception if they had any we could borrow. They did and bought him a bottle of warmed milk, up to our room, within minutes. Had we remembered his bottles (and marked them with his name) they would have also taken them away to be cleaned and (if we still needed them to be) sterilised.

Our room was a double, described as a “compact room, with a double bed and room for one cot/single bed”. We were pleasantly surprised with the amount of space this ‘compact’ room came with. We requested a proper wooden cot for Oscar (yup we still have the bars up at home) yet there was plenty of room for all of us. The room was well equipped, with a bath (important if your bedtime routine includes one as Oscar’s does), a TV & DVD player (again great if TV is part of your bedtime routine – we planned to use our iPhones, but the Wi-Fi signal was patchy. I would definitely take DVDs of any faves if we were to visit again) and the most amazing view from the balcony. Which was another little detail we loved. The balcony was a beautiful, and solid, five foot high twisted willow barrier. It meant we could happily leave the patio doors open with no worries of him falling/climbing/flashing the neighbours. Perfect.

The attention to detail continued in the dining room. All the tables were generously spaced apart, with highchairs provided. As soon as we sat down for high tea (Oscar usually eats at 5 so we stuck to this while away, although we could have chosen to eat later at 6) a bowl of carrots, cucumber, pita and humous were bought out to stave off any hunger grumps until dinner arrived. The children’s menu had something for every taste (from baby purees to Naan bread pizzas) and age (with toddler and older child size portions). The boy is a big fan of carbonara, so we thought we’d give the mac’n’cheese a whirl, to much success. We chose to take our own bag of toys and colouring books to every meal time, but we really needn’t have bothered as the dining room had their own supply.

Food for the grown ups was just as well thought out. The menu changed one starter and two main courses every night, meaning you always had the choice of something different. The first night I tried Salt Cod and went completely off plan the second night with delicious Pork Belly. The dining room in the evening was a very different place to the day time, with candles on every table and no young children, largely thanks to the baby listening service available in every room. We (read I) was a little anxious at leaving Oscar the first night. Would he settle? We kept his routine as much the same as possible then put him in the cot. I read him a story, explained I’d just be downstairs and left him, to minimal grumping. I must admit I did jump up like a meerkat every time the receptionist walked through the lounge for the first hour (and actually went to check in with her before we went into dinner. She showed me the bank of phones all plugged into the baby listening service, not one of them making a noise!) but I needn’t have worried. He settled brilliantly and although I did see reception come find a couple once during the evening it wasn’t us!

Time for ourselves was one of the most attractive features of Moonfleet, as not only do they have a baby listening service, they also have a creche, which we booked him into (for two hours a day) when made our reservation. I was so excited to drop Oscar off on the Tuesday afternoon and he ran in without a second glance back. However, I know my son and to be honest should have known that leaving him with strangers for the first time ever, on the day we bought him to a place he’d never been was a BIG ask. He managed an hour before having a complete spontaneous melt down. The staff realised this wasn’t a momentary outburst and, quite rightly, rang reception who came and found us in the lounge. Retrospectively I am really proud he managed that hour at all, but at the time I was convinced that the creche would no longer be an option for us. But we followed his lead and took him again on the Wednesday. We planned to only leave him for an hour, but when Ben went to pick him up, he was so busy having a whale of a time we left him for the full two hours.

I’m so glad we didn’t give up on the creche as it gave us the time to do things just for us. Things like read, sit quietly and avail ourselves of the spa facilities. The spa staff were just as friendly as everyone else ( I spent a very pleasant hour chatting to the lovely Chloe while she did a super French pedicure on me). One of my favourite memories was Wednesday afternoon. Oscar was in the creche, Ben was in the Spa and I was alone. I found a comfy armchair, ordered a cheeky glass of Prosecco and read a paper. It just felt so decadent.

What else can I say? I could go on for days. I could talk about the indoor playroom, as big as a barn full to the brim with fun. I could mention the swimming pools or the cinema room or Snoopy the hotel dog, but you can read all about those on the website. For me the thing the trip gave us was time. Together and apart. Oscar is by nature a curious chap. He needs to know exactly where he is and what’s going on to feel comfortable. He’s also a runner and constantly tries my blood pressure by running away from me. I knew taking him away could potentially be very stressful. And the first day had it’s moments. But, I don’t know, after his nap on the second day he seemed to wake up with a new attitude. One of ‘OK I’m here and I like it’. He stopped running off, he lead the way to the garden or to our room and held my hand if we needed to walk across the car park. Seriously, it was like watching him grow up before my eyes. He was so much more relaxed. And you and I know that happy bambinos mean happy parents.

Would we go back? Definitely. For longer and out of season. Two nights was great, but we were just getting settled and then had to leave. More nights would also give Oscar the time he needs to adjust. Going out of the school holidays (while we can) would not only make it a cheaper proposition, but would also change the age of the younger guests. More babies and toddlers and less tweens. Not that the age seemed to bother Oscar – he adored the ‘big boys’ and followed them round the garden copying their antics!

Would we try another Luxury Family Hotel? In a heartbeat. 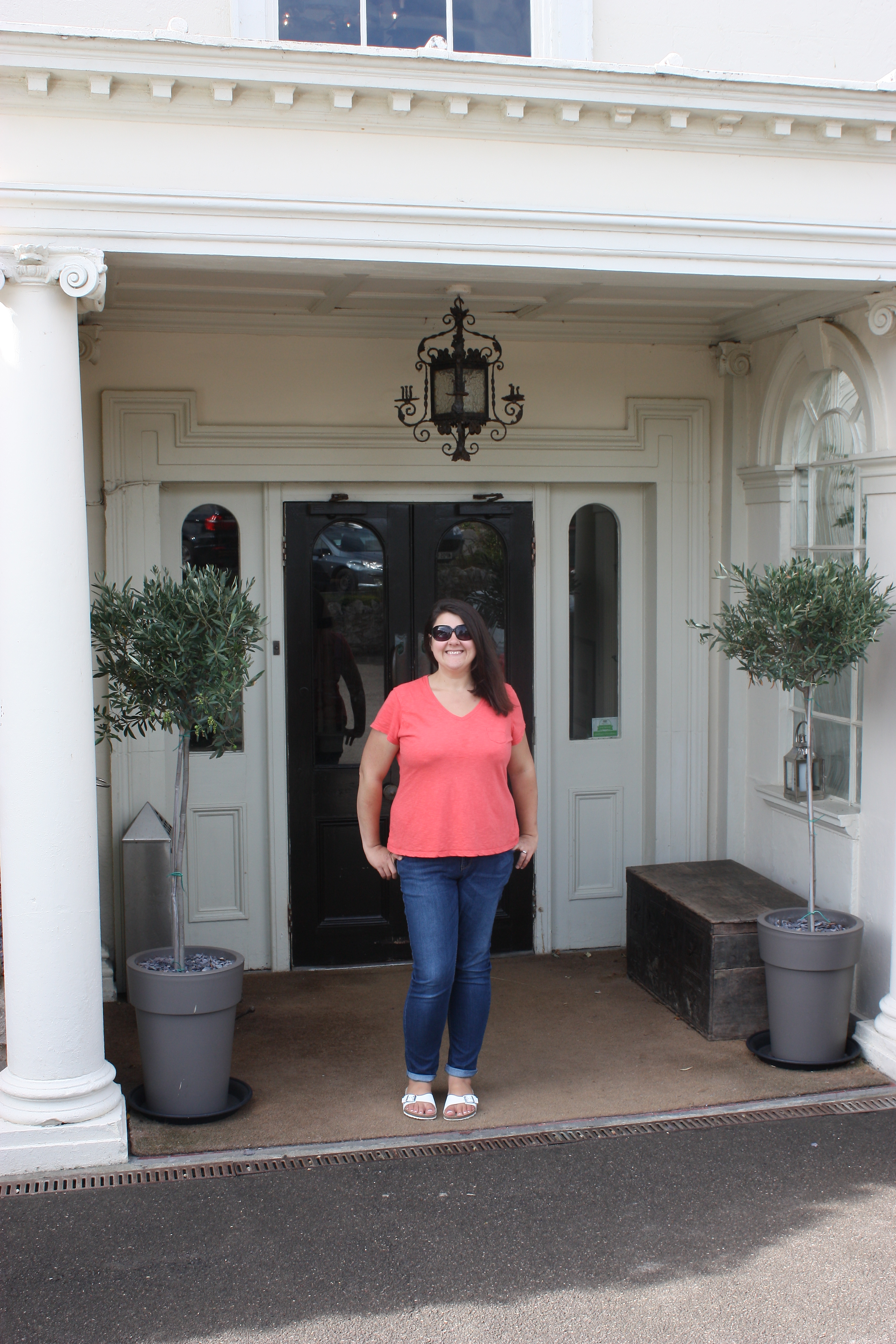