Despite only using it it for the past six months, Pinterest and I have had something of a bumpy relationship. I avoided it for so long because I worried that, once I jumped in I wouldn’t find my way back out! To be honest I have had moments like that, but all in all I have found it to be a great resource. I don’t tend to pore over it, looking at interiors I would never be able to replicate, and homes so tidy I’d be scared to breathe in them. Doing that tends to make me feel a tiny bit miserable. So instead I tend to use it to find ideas for specific projects, like when we redecorated our room, and the Pretzel Pumpkins I made at Halloween. Just lately I’ve been trying to be a bit braver when it comes to crafting with Oscar. I wrote recently about how he’s started to really enjoy play dough, so last week, with the rain pouring down and me without a car, I decided to pull my finger out and try some ideas for entertaining toddlers with cabin fever.

The first thing I tried was home made Moon Sand (using this post from the wonderful frugalfun4boys.com) and I can’t tell you how easy it was or how successful it was. To make it I emptied one can of shaving foam in to my maslin pan and mixed in a few drops of blue food colouring in until it was evenly distributed. Then I mixed in one box of cornflour a bit at a time to make sure it was all mixed thoroughly. The end result was the texture of damp sand and smelt like my Grandad (I’d forgotten he used to use Gillette Sensitive until I squirted it out!). 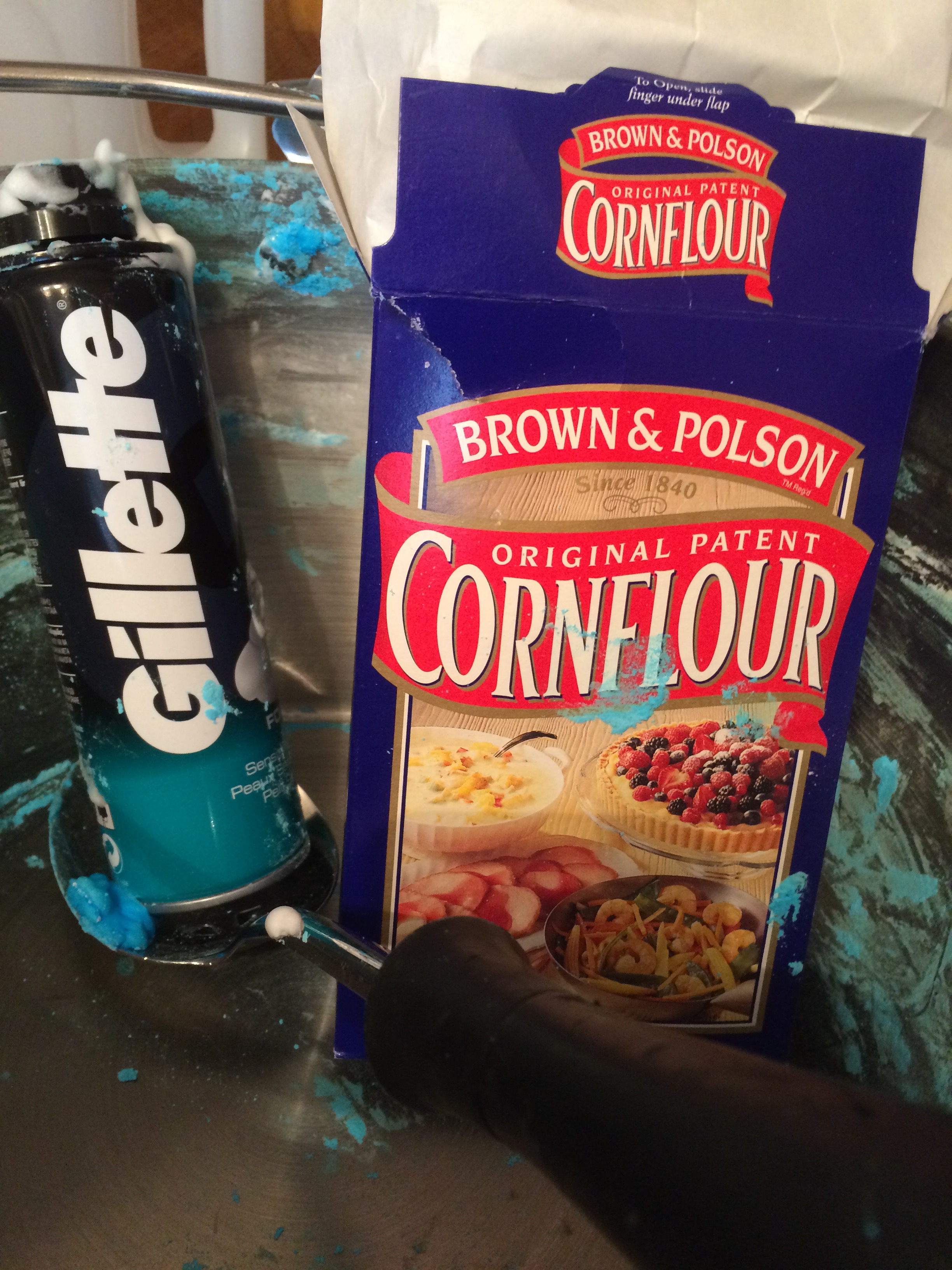 I then dumped the whole lot into a cheap underbed storage box (wide and deep), covered the kitchen floor with a plastic dust sheet (I had no idea how messy this stuff might get, so thought I better play it safe), put a few of Oscar’s toys in it and called him over. I couldn’t believe I’d managed to prep and set up a craft in such a short space of time and with the boy in the next room!

We had a great time together. He listened when I asked him to keep the stuff in the box and I loved making little sandcastles with him

This stuff was amazing. Let’s forget for a moment that I got the recipe from Pinterest and it actually worked for me (Yay!), he absolutely loved playing with it. The sand stayed pretty much in the box and what did get on our hands, clothes and the floor came off so easily (I patted myself on the back for the bright colouring – it meant I could see it to clear it up!). It was easy to assemble, the ingredients were easy to get hold of and cheap. But the best bit was it is reusable. After we finished with it, I shook as much off the toys as possible and pored the sand into a smaller airtight container (you could leave it in the box you used to be fair, it was just easier for me to store it in a smaller container). Then on Sunday we set it all up again and Daddy got to have a play with it too!

Buoyed by my success with the moon sand I decided to have another crack at my own playdough, with a recipe I’d been given by our local Children’s Centre.

I didn’t use glycerine in mine and I coloured it red. I would say 1 minute was probably enough in the microwave for me, but your machines may vary so start with a short burst and keep checking it. It came out a treat. Wow! I can do crafting after all and the boy loved it!

I think I just need to be a bit braver when it comes to crafts (and mess). I’ve been looking into making my own paint and I found an awesome post of how to get any stain out of children’s clothes. I just need to find a good, reasonably priced craft supplier. Where do you guys get PVA and glitter from? I miss Woolworths!