OK, I know this looks like I’m writing a crafting/messy play series and I promise this wasn’t the intention. If I’d been more organised I guess I could have done. Ahh well, next time!?

So next in the line of crafty activities I’ve been doing with Oscar involves a different kind of play dough, that had been recommended recently by several friends. This one was even easier to prepare that the Easy Playdough I made recently. This one has two ingredients: cornflour and hair conditioner. I know right!!?

I don’t use hair conditioner myself (what? I don’t regularly use moisturiser either – it’s not that I don’t want to, it’s just I never remember to), so bought the cheapest bottle I could find at our local supermarket. I plumped for a pale green one, with a minty fragrance. I thought this would add a nice sensory touch to the dough. Which it did, although it did leave me with a craving for Soft Mints all day! 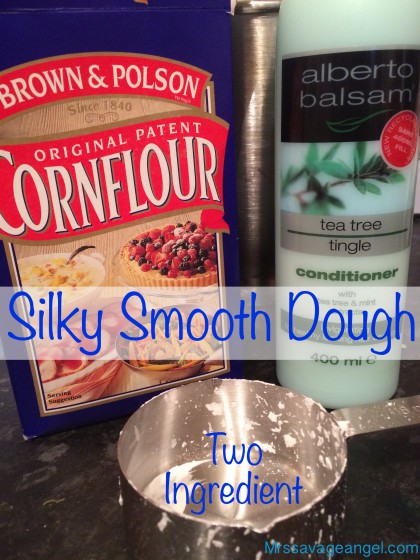 This dough is quite a different texture to the flour based ones. It’s a smoother consistency once kneaded but dries quickly. A quick knead though and you’re back to silky smoothness.

Directions: I mixed one cup of conditioner with two cups of cornflour. I didn’t use colouring this time, but you could! Mix and knead. Simples!

The best thing about this dough is the stretch you get from it! Due to the non-Newtonian properties of the cornflour (can you tell we have a nerd in the house?) it can be both soft and hard at the same time. The boy played with it for ages, burying Thomas the Tank Engine in it, then pulling the train back slowly to see how far he could stretch the dough.

Despite it’s silky, smooth appearance, this dough is actually very crumbly, meaning it was also much more messy than regular dough. Had I realised this beforehand I would have let him play with this in the kitchen on the tiles, not in the lounge on the carpet! That said, it cleaned up with a damp cloth and a hoover, so it wasn’t all bad. The only thing I would say is I wouldn’t give this to babies or children with a penchant for putting everything in their mouths. Hair conditioner is really not something you’d want them to chow down on.

So , yes it was pretty messy, but clean up was easy enough. It wasn’t my fave, but the boy loved it and at the end of the day that’s what matters when it comes to messy play.

I need some more ideas of things to do now. Something less about the end product and more about the process. Any ideas would be greatly received. And before you ask I’m think I’m going to save Ooblek for the garden months! Well, wouldn’t you?

Yesterday we tried #geochaching for the very first

I have barely touched a drop since lockdown began,