How was this week for you? Mine was better. Not brilliant, but not as awful as it has been. I guess its called ‘coming to terms with the situation’. Any who, I’ve not been gorging the way I did last week, however I have taken a much more laissez faire attitude than I normally would, to the food I’ve been eating. A ‘what happens, happens’ approach if you will. Meh, its been OK, but has obviously resulted in another gain. 0.5lb on. Which has heartbreakingly (for me) just dipped me back under the 6 stone mark to 5 Stone 13.5lb lost. Bleugh.

But over the past few days I’ve started to feel a change coming on. Due in part (maybe!) to the effect eating fat has had on my gall stones. Owch! That’s not helping anyone! So I’ve gone back to planning meals a bit more carefully. For dinner this week I intend to have (although not necessarily in this order):

Dinners I’ve made before and know. The pork is divine and makes so much I may actually have this twice. I’ve also stocked up on fruits such as pears, melons, bananas, grapes and frozen raspberries:

So I have the wherewithal to give my body a break from the crap. But I’m not pretending it’ll be easy. I find the snacking unbelievably hard to control, particularly after an extended period of indulgence! Its about mind set I guess. Being mindful of every minute. Stopping and asking every time is this really what I want. It’ll take a lot of energy, but I’m just taking one day at a time. Kind of like you would if you were a new member I suppose. And I think if I can get a good day in the bag, that can lead to another. And another and before you know I may just have a whole week I can be proud of!

I’m also drinking more water. And when I say water I mean, actual water. I’m not a water drinker as you may know. Can’t stand the stuff usually and stick to Robinson’s sugar free Apple and Blackcurrant squash. Only they’ve gone and changed the recipe and I really don’t like the taste. I had a couple of glasses before deciding I really didn’t like it and actually water might be boring and not taste that nice either, but my god it was better than this. Slightly disappointed, but in the long run, if it gets me drinking more plain water, its probably only for my own good.

So this week I’m definitely feeling more positive about facing the week ahead. And then yesterday a photo popped up in my Timehop that made me stop and think. 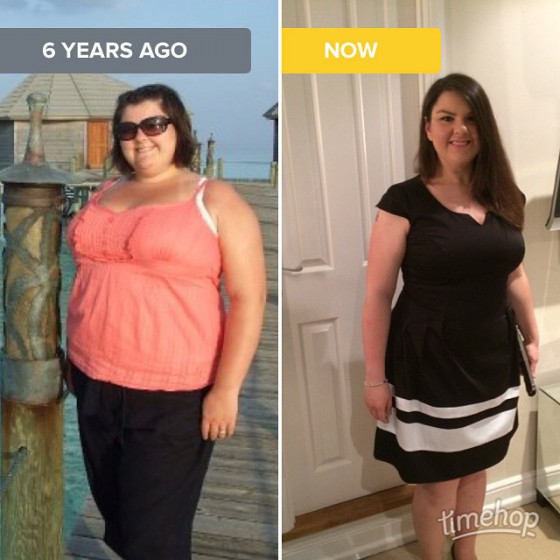 Have a great week people