We don’t have a summer holiday the way the Americans do. Our weather is so unpredictable, even in the summer, that BBQs tend to be last minute things, with no planning involved. So when my American friend Bethany suggested we have a Summer BBQ months ago it was actually really exciting to plan. Weather be damned! And when she suggested having it on 4th July, to celebrate Independance Day, well, I hit the Pinterest with a vengeance.

Having used Pinterest for Oscar’s birthday party recently, I was aware how bonkers they go for party theming stateside, so was unsurprised to see how many ideas there were for a 4th July shindig. I found a red, white and blue version of everything you could possibly need or want at your patriotic BBQ, some of it really awesome looking, some incredibly tacky. Then I saw this recipe for a layered dip. Designed to look like the American flag! It was just so, well, American. I knew straight away I had to make it as a centrepiece for my first all American cookout.

It was actually incredibly easy to make, but looked amazing and tasted fantastic. 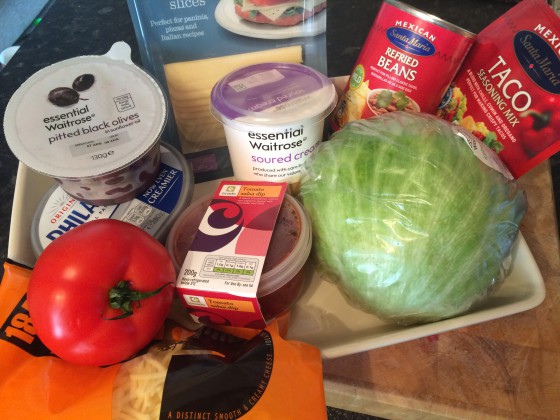 If you want to do the flag decoration then also:

Cover the beans with the salsa, cut the olives in half and sprinkle over the salsa. 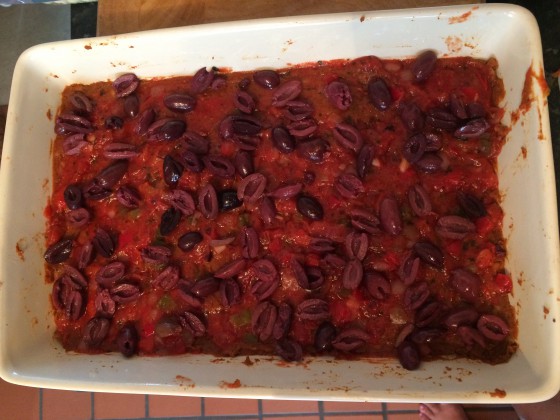 Top with the shredded iceberg lettuce and the cheese

Mix together the Philadelphia with the sour cream.

If you’re going to make this into a flag, then use a small amount of the cream cheese mix to make a small square in the the top left hand corner of the dish.

Blitz the blue corn chips in the food processor (or otherwise crush). Sprinkle the crumbs onto the square of cream cheese mix.

Then put the rest of the cream cheese mix in a freezer bag or a piping bag (depending on how fancy you are 😉 ), snip the end off and pipe stripes across the dish.

Chop the tomato finely and fill the gaps inbetween the cream cheese mix.

I had a tiny star cutter (thank you the boy’s playdoh box) but you could just use a straw a make dots in place of stars. Cut them out of the mozerella (the sheet slices, not the fresh stuff) and pop them on the blue chip crumbs.

Serve with the remainder of the blue corn chips or any other tortilla chips you like. Or a fork. It’s that good!

Obviously, we would have less need for a dip that looks like an American flag, in the UK, but I totally urge you just to make a stripy one instead. Or if you’re the crafty type, how about a Union Flag?

Let me know if you have a go at this. I’d love to hear if you like it as much as I, and my guests, did.