I know, I know. I haven’t written one of these for the past two weeks. That’s due in part to the boy being off on his preschool Easter holidays. I find it so hard to concentrate when he’s around, particularly to write these posts, where I have to think hard about what I want to say. And if I’m honest it’s also in part because I’ve not had much to say. I gained 3lb over the Easter break. I stopped trying so hard when we went away and then it was so difficult to refocus when we came back. Why is that? Why is it so hard to fall back into negative habits, but so hard to stick to new positive ones?

Anyway, I’m disappointed with my results over Easter, but actually when I think about it (and look back at last year’s blog post) it’s almost exactly the same as what happened last Easter. And I pulled it back then. That’s good to know.

So this week, I actually started, albeit very slowly, to turn the tide, with 0.5lb off. 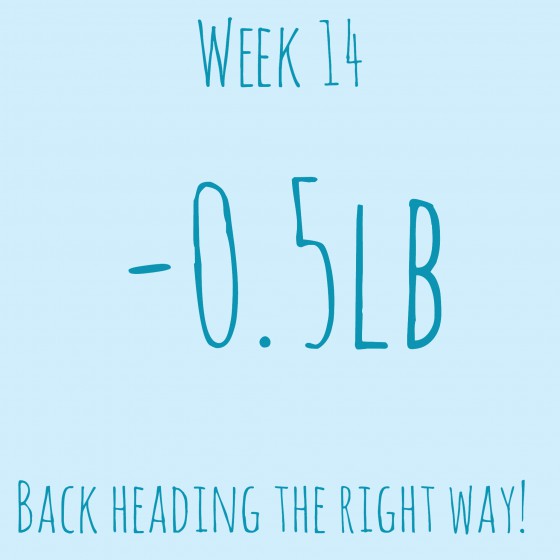 So I’m back to having lost 13.5lb, dipping just back under the stone. And as that makes me sad, and I don’t like feeling sad, I need to change that asap!

And I plan to do that with the aid of a slow cooker.

My friends have been going on about their slow cookers forever, and this week I finally capitulated and got myself one. And I swear I may never use the hob again ðŸ˜‰. First day I had it I made bolognese and then on Saturday I got hold of the most enormous piece of brisket Waitrose were selling off cheap. Oscar loves watching the Buzzfeed Tasty videos at the moment (over and over!) and they occasionally have slow cooker recipes. One that really caught my eye was one with a huge piece of chuck steak. So when I got this brisket I had to try it. I halved a load of new potatoes, some carrots, placed half the brisket on top of the veg, seasoned and added Worcestershire Sauce, a splash of water and, 5 hours in, a couple of springs of rosemary and thyme. 6 hours on high and BOOM! We had the most amazing dinner. So amazing I didn’t get any pictures ðŸ˜ž. Anyway, the plan was to freeze the other half of the brisket and make pepperpot stew later in the week. Didn’t happen. We just had exactly the same meal on Sunday! Basically we ate half a cow this weekend! Half a delicious cow, mind. And this week I’ve already made Pork Vindaloo from the Slimming World Curry Heaven Book. I made double the amount and one half has already gone in the freezer and the rest is for dinner tonight. I’ll report back next week!

So other than slow cooked deliciousness, my other discovery over the past few weeks has been chicken burgers! When I wrote about how much I loved Heck sausages (they’re a freezer staple in this house and we buy them in bulk online!), the very lovely people at Heck Food sent me some of their Chicken Italia Burgers to try. Each burger is only one syn each and blow me if they aren’t blooming gorgeous! And so flipping versatile! I’ve had them as just delicious burgers with jacket potatoes and veg, but they’re fab chopped up and added to things too.

One lunch time I was planning to have burger, beans and mushrooms, you know, separately, then I decided to just mix them all together and accidentally invented a lunch time ‘Quick Casserole’. It was amazing and so filling!

And then another day, inspired by a picture on the IG account of @Shanonnagain58, I had a crack a Mexican style breakfast burrito. Chopped burger, with spicy scrambled egg in a BFree Wrap (1 x HEB) with a side order of mushrooms (I love mushrooms can you tell!). It made so much burrito ‘filling’ that I had trouble picking it up! Amazeballs!

Who knew a burger could be so much more than just a delicious patty on a bun? I’m just off to place another massive order of sausages (seriously I think I have a bit of a problem with these sausages 😉 ) and I’m totally going to order burgers this time too!

So this week I’m feeling much more positive at my own capabilities than I have been. At least I am today (don’t you find it changes from day to day?). So lets take this a day at a time 🙂

I honestly love these burgers. They are so delicious and at one syn each so easy to fit into the Slimming World plan. I’d like to thank Heck for gifting them to me. I was not paid to write about them and as always my opinions are my own.