I wrote my last Slimming World update in April last year. We’d not long received Oscar’s Autism diagnosis and dealing with that, physically every day and emotionally every minute of every day was hard. Too hard to think about much else if truth be told. Is it realistic to be counting syns when you’re heart is breaking over and over again? Receiving Oscar’s diagnosis was such a sucker punch to the guts, it just took everything out of me, including any motivation I had to keep losing weight. If you have been reading for a while you’ll know back in April I decided to ‘maintain’. It was a good decision at the time but I was unaware of just how hard the year was going to get. Not the day to day of living with an autistic child, but the bigger picture stuff. The coming to terms with who I was now, the life I was going to be leading, the logistics of that life and what it meant for us as family. I wont lie, it floored me. I stopped going to group in August and I eventually turned back to familiar habits. ‘Comfort’ eating. It did nothing of the sort, but it rarely does. I gained weight. A bit and then a bit more and then a lot more. I’m not proud of it, but I wont apologise for it either. I challenge anyone to go through something similar and not turn to some form of vice or other out of desperation just to feel a little bit better today.

2015 sucked. It sucked balls. But 2015 is over. It’s been nearly a year since we got the diagnosis and while for ages it felt like I’d never feel like myself ever again, over Christmas I realised I would, but that it was down to me to carve some space out in my life to do so. Christmas was unbelievably good (you can read about it here if you’re so inclined). We went away. Put everything in our lives that was causing us sadness down for a couple of weeks and saw people we loved. We couldn’t have done anything better. Yes, life was here waiting for us when we got back, ready to be muddled through, but just a small step back gave us perspective. Oscar’s care and education and all that jazz, will be whatever it is because of me. But it will also be whatever it is regardless of how how much I weigh and how happy I am. So I have a choice. I can live my life being sad and heavy, or I can take some time and space back for me, Autism or not.

So last night I made the decision to go back to group and start again. I can’t tell you how nervous I was. I had a terrible head and back ache all day. I just had it in my head that everyone would be looking at me, judging me, seeing just how much I’d ‘failed’. Then Ben asked, would I feel that way about anyone else who’d had a break and gained any weight, regardless of their situation? Of course he was right and I hate it when he’s right 😉 So I strapped on my fighting boots and walked right back in there. To be honest it felt so lovely to be back. There were lots of new faces (with it being January) but there were also existing members and friends I hadn’t seen in ages. And everyone had the same sheepish grin when we talked about Christmas and many even had the same nervous look in their eye that I did. No one was judging. I don’t know why I ever thought any one would be. Everyone who goes to Slimming Word goes with the same goal; to lose weight and to get some support while doing it. It wouldn’t have lasted all these years if anyone was ever made to feel judged negatively for making a positive choice to (re)join.

Weigh in wasn’t much fun obviously, but do you know, it was what it was and in that moment I couldn’t change that. All I can do is move forward. I made the decision to keep my old book, because I don’t want to wipe all my history for good. I did work really hard for that and I’m proud of it. But I’ve drawn a big old line under last year’s results and I’m starting again. I don’t want to think ‘Oh I’ve gained X amount and I’m back to X date’. That’s not going to help. So today was day 1. I’m doing this like a new member. I’ve set a new interim target of 2 stone loss and this week I’m going for 2lb. 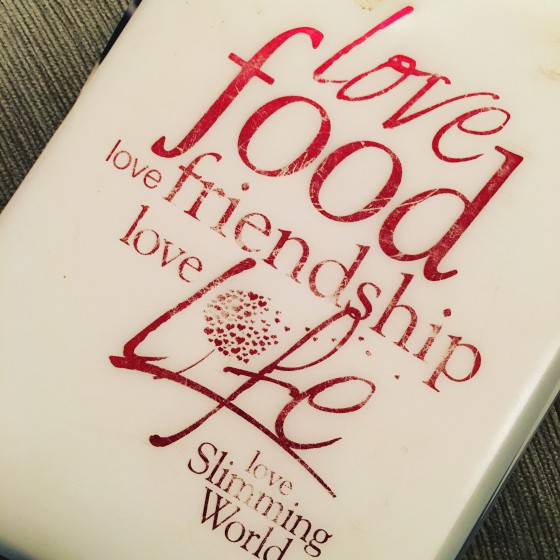 I wasn’t planning to blog about this all again, but when I mentioned on FB that I was going back to SW, someone told me how much they’d missed my posts. Which was sweet. So I thought why not. What I wont be doing this time round is feeling under so much pressure to write interesting, motivational updates that I’ll come to loathe doing them. These posts will just be me updating of how I’m doing and working through any issues I’ve had. And maybe having a few laughs along the way 😉

I hope you had an awesome Christmas and New Year.