In just a few short weeks time, my bouncing little ball of energy, also known as Oscar, will be turning four. FOUR! Man alive, how on earth did that ever happen? A year. Over. Done. Never to be repeated. When you look at the passage of time through the ageing of a child it makes everything feel so much more transient, so here today gone tomorrow. Literally. Ahh my sweet sweet boy. Every day you change, every day you grow.

So aside from getting maudlin, and feeling all kinds of old ? we’ve been thinking about how to mark our little guy’s fourth birthday. Last year, you may recall, we threw him a wonderful party with the help of our friends at The Hen House, Haslemere. It’s was awesome! So awesome in fact that we weren’t sure what we could do to top it this year (not that it’s a year on year competition, but you know what I mean!) We ummed and ahhed and looked around locally, but couldn’t find anything suitable. Then we started talking about how much fun we had over Christmas and how it would be lovely if Oscar could share his birthday with his extended family.

So that’s exactly what we’re doing. We’re going down to Plymouth for Easter. We’re staying in the same apartment as at Christmas, and we plan to celebrate his birthday, with his extended family, a week early, on Easter Sunday. I’ve been pinteresting like mad already for some Easter themed party food and while I won’t be going mad, a centrepiece always goes down well I find. My favourite at the moment is this one. Isn’t it too cute?

Any other Easter themed party food ideas gratefully received. Seriously, if you’ve got any ideas, or blog posts to share, I’d love to see them!

So that’s the party sorted, but then there’s what to get him for a gift. For the last few years we’ve concentrated on large garden toys for his April birthday, setting him up for the coming summer. And that’s been great, but this year we haven’t really got anything in mind. Maybe a bigger slide? But where would it go? Hmmm. It’s a conundrum that’s for sure. And in terms of play toys, there’s nothing he desperately wants and nothing much he needs, to be honest. He’s got more Thomas toys than you can shake a stick at and Duplo coming out of his ears! He has no interest in any of the movie tie ins and flits between favourite cartoons most days (last week it was 1940s Tom and Jerry, this week it’s been 1990s Rugrats – all hail TV streaming services!) He has just started to pick up things (straws, sticks, the Hoover!) and use them as guns, but this upsets me no end and I have no wish to encourage it. So we’re back to the question; what do we get him? What is he in to?

There is one idea I had. It may sound crazy and you may think this is more for me than him, but hear me out. The boy loves to bake. This has been a thing now for over a year. But recently he’s decided he doesn’t like using my Kitchen Aid and instead wants to ‘mix’ everything himself in a ‘giant bowl’ (his words). For this you need a good sturdy bowl, and I just don’t have one. We tend to use my mixer bowl, which is light and topples off its tiny base regularly. He needs something better. I’ve always loved Mason Cash bowls. My mum had one, my Nanna had one. I used to think owning one was almost a prerequisite for being a mum. I always wanted a beige one, just like my mums, but recently Mason Cash released their Varsity range, in cream and Navy Blue. So I started thinking, actually, of all the things we could get him, how about his own ‘giant mixing bowl’? And if we’re going to do that, why not get him the grande dame of bowls?

Surely that’s what every four year old would want for their birthday. Right?

Come back in a few weeks, I’ll let you know what we decide!

The hottest day of the year yesterday and today? Pah. Gloomy, murky, rainy! What the dickens is going on? It’s July for goodness sake. Well there really was little else for it we needed to bake today and something comforting on this warm/cold/murky/grey July day. Happy British Summertime.

Like many of our forays into the kitchen I looked in the cupboards, saw what we had, and googled the ingredients for inspiration. That’s when I found this recipe over at the awesomely name Yammie’s Noshery. The beautiful photos won me over and I just had to give them a go.

So I got the bowls out, called Oscar over and told him to get get a chair to stand on. And he did! Lets just take a moment there to marvel at that fact. Ahhhhhh. Right, so anyway the cookies, yes? 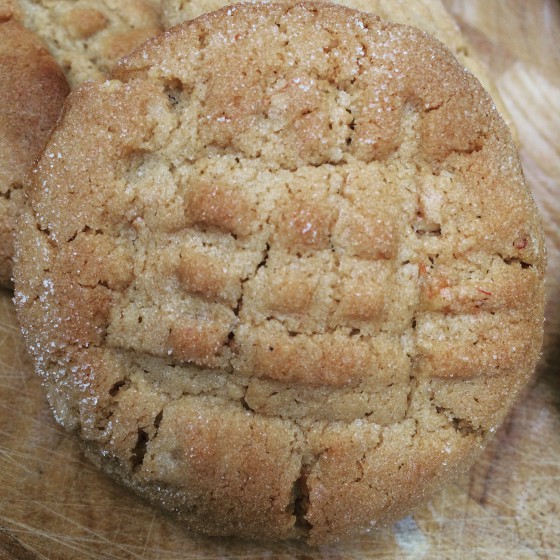 These were great to make with the boy as unlike recent attempts in the kitchen they required no melting or hob work. Perfect for little hands who just love to dump stuff in a bowl and mix.

The original has these in cups, but I’ve converted to grams, cos I’m super nice like that. I’ve also made a few tweaks, including using gluten free flour as usual. Should you prefer standard flour then just omit the Xanthan Gum

Apologies for the lack of photos of the boy helping me. I promise you he did, but I’d left my phone in the other room and you know how they are once they start something!

I am totally going to have to make these again (not that the waistband on my jeans wants me too – they’re so good). The boy loved mixing the ingredients and the mixture is so tactile. Rather like very soft play dough. And so quick. From ingredient to grateful munching in around 20 minutes. I can see them being really good with added cinnamon and rolled in demerara sugar closer to Christmas.

So next time you have a friends coming over and there’s a gluten free eater among them, whip up a batch of these. Everyone will be grateful you did.

OK so this is a teensy bit of a cheat in the ‘The Boy Makes’ series. Oscar did indeed help me make this, but only parts of it (for reasons that will become clear). However, this is my first foray into a completely new, throw it together and see what happens recipe and as such I couldn’t not include it here. Plus once you taste it, you’ll thank me forever more!

So a crumble you say. Usually the reserve of Autumnal feasts and its true it does have a taste of the colder weather about it, but it came about because I had a load of fruit that was lying bruised in my fruit bowl. Apples and Pears were what I had so Apple and Pear something it had to be. I chose a crumble because although Ben loves a crumble (as do I) what with one thing and a Slimming World I haven’t made one for ages. It’s not exactly a health food now is it, but I can tell you now making nothing else makes me feel as mumly or wifely or as god damn gorgeous in the kitchen!

For the fruit filling 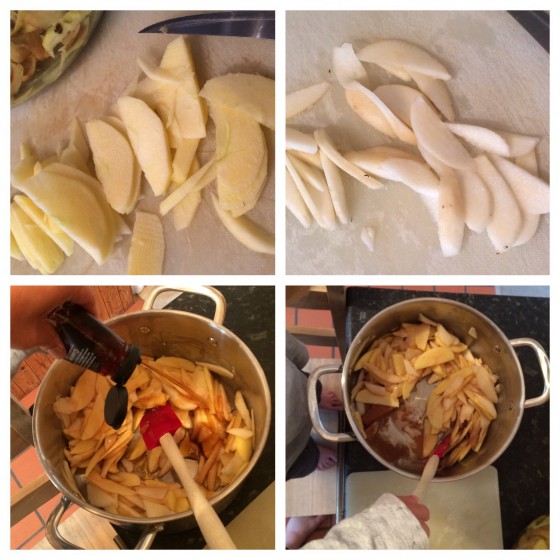 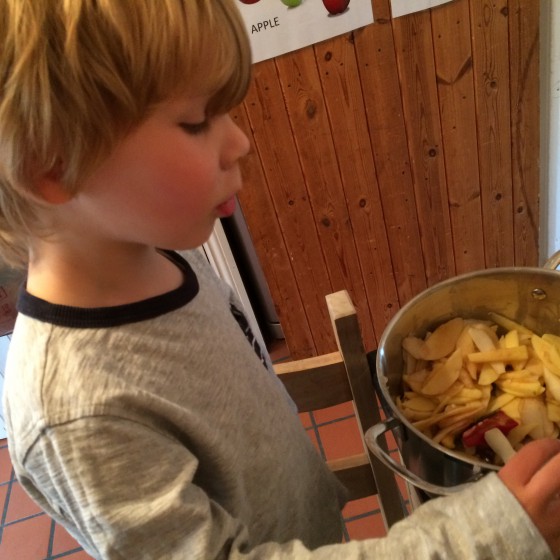 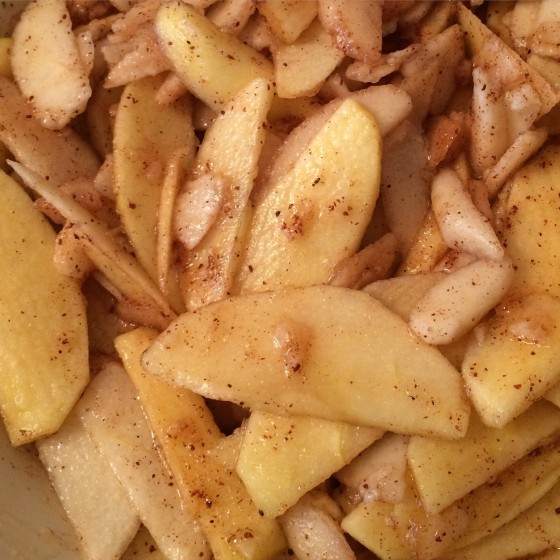 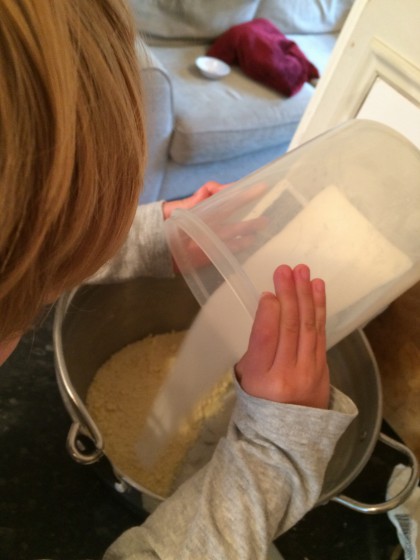 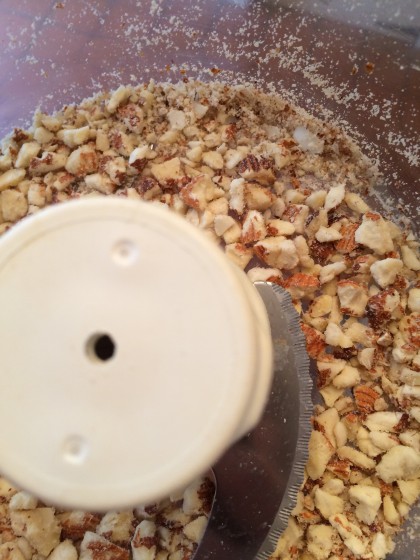 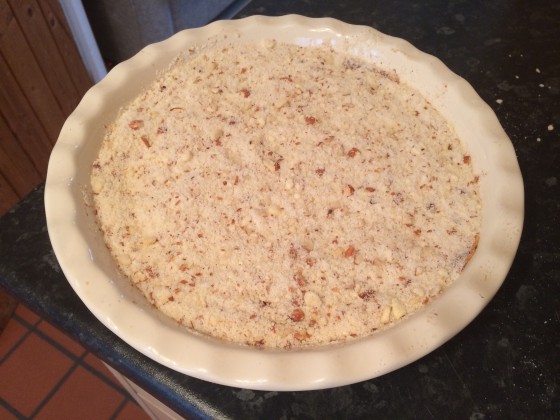 Serve as you see fit. I like to serve mine with vanilla ice cream (something about the contrast between hot and cold is just mouth watering), but you could use cream, custard or nothing at all!

Et voila. The very best crumble I have ever eaten. I’m sorry Mum and I’m sorry to both of my Nanna’s, but it really is that good.

I leave the recipe with you, jealous that you get to try it for the first time and hope you love it as much as I do.

I’ve not had much luck with gluten free cakes so far. They’ve been OK, pleasant enough I suppose and Oscar’s been happy enough to wolf them all down, so they can’t have been that bad. But I don’t know, they just didn’t taste quite right, if you know what I mean. So I decided to give our family favourite a gluten free make over and see if I couldn’t make a really good gf cake.

Ben’s absolute favourite cake is Chocolate Banana Bread. It’s a slightly tinkered with version of this Nigella staple and I’ve made it many times. It’s great fun to make, primarily because I love squishing the bananas, and so I thought Oscar would enjoy it too. We gave it a go two weeks ago and it was such a roaring success, with everyone who tried it, that we’ve made three more since. And not one has hung around for long! It has a moist quality I’ve not found in other gf cakes and using good size overly ripe fruit gives it a wonderful banana sweetness.

So just for you this is our gf version of the best banana bread you’ll ever taste.

As in previous recipes we used my Kitchen Aid, but you could also do this by hand. 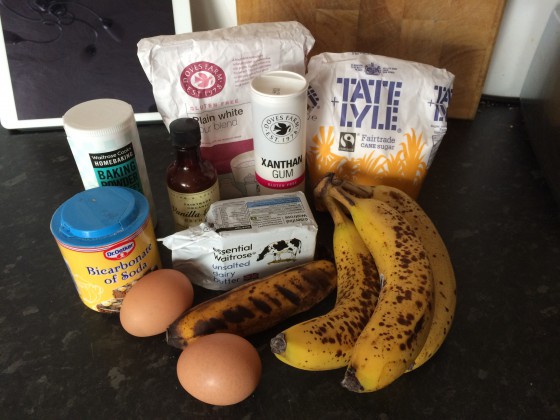 We assume it lasts well for a few days in an airtight container blah blah blah….. It’s only lasted a few days wrapped in foil in our house. Absolutely delicious when the boy’s gone to bed, sliced thickly, warmed in the microwave and severed with Vanilla Ice Cream!

Over the Easter holidays, the boy and I were inspired to have a crack at some more sweet cooking projects. We made chocolate cupcakes one day and then, scrolling through Instagram one morning, I came across this post for Homemade Bounty Bars by the gorgeous Mrs Bishop over at MrsBishopBakesandBanter. I LOVE Bounty bars and the boy has taken a real shine to coconut and dark chocolate recently (there’s not an issue in the world that can’t be solved with a Mrs Crimble’s Chocolate Covered Coconut Macaroon I tells ya!). We’ve never tried making proper ‘sweets’ before, so I thought this would be a fun place to start.

The recipe Mrs B (and I!) used was incredibly simple with just four ingredients: 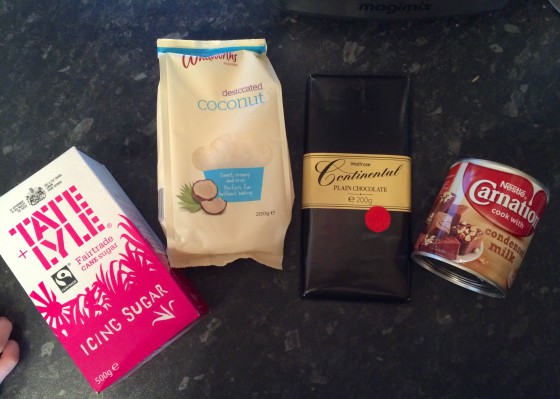 Oh my life they were so good! We’re definitely going to make them again, but next time I am going to fiddle around with the proportions. I want to try adding more coconut and a little less sugar. I’m also going to make 16 small bars, instead of 8 big ones. Don’t get me wrong the big bars looked awesome, but realistically, I think a smaller bar would have been enough. You could also try making them in to bit size pieces, perhaps for a party. Bounty Bites, if you will! I think you’d easily get 32 bites out of this recipe, although I’m not sure if you’d need slightly more chocolate. Give it a go!