So you may remember back in November I mentioned that I was taking part in a Blogger gift swap, a kind of Secret Santa for people who do what I do run by Viola over at apieceofviola.wordpress.com.

I was so excited when I found out my swap pairing was the lovely Charlene over at charlenejess.wordpress.com. Turns out she is a book reviewer, so my first thought was to get her a book. However the more I read of her blog the more I figured she would get books no matter what. Charlene is a single mum, with very little family and mentioned in a blog post that she doesn’t receive many presents, so I decided to get her something she probably wouldn’t get for herself, something a bit fun. And when she told me she liked Marvel and the colour purple, well, I think I found a great present to send her. I do hope she liked it and I can’t wait to read her post about it.

I received my gifts from her a few days before Christmas. I was thrilled to have received several little gifts – I love the opening as much as what’s inside and I couldn’t wait to put them in my stocking on Christmas Eve.

Charlene told me her 8 year old son had wrapped and labeled them for me. What a dude! Thank you Lynx, you did a stunning job!

It was such a great set of gifts, that I’m loving using already. Thank you so much Charlene. I hope you liked your gift as much.

I’d also like to say a massive thank you to Viola for setting this gift swap up and running it so beautifully.

A Merry Christmas and a Happy New Year to all my fellow bloggers.

Guess what? I’ve only gone and been nominated as a One Lovely Blog! I know right?! How cool is that? I’ve seen others be nominated before and I’m so pleased to be included *blushes ever so slightly*. So what the dickens is it?

“The One Lovely Blog Award nominations are chosen by bloggers for newer or up-and-coming fellow bloggers. The goal is to help give recognition and to also help the new blogger reach more viewers. It also recognizes blogs that are considered to be “lovely” by the blogger who chose them. This award acknowledges bloggers who share their story or thoughts in a beautiful manner to connect with their viewers and followers. In order to “accept” the award the nominated blogger must follow several guidelines. These are:

So without further ado, I hereby accept my One Lovely Blog award.

I’d like to say thank you so much to Chelsea over at Mom Outside the Norm for the nomination. It was completely unexpected and I was very touched, so THANK YOU CHELSEA!

Oo the tricky bit. 7 facts about me. Hmm I did write a post a year ago with many interesting (hahahaha!) facts about me. So I guess I should think of some different ones. Hmmm let me see. OK how about this:

There you go. Bet you didn’t know that!

And the final part, the 15 ‘lovely’ bloggers I admire and want to nominate. And they are (in no particular order):

Et voila! That’s a real mixture. Some obvious, some not so obvious, but all fab. I urge you to check them all out!

I’d would also like to thank the bloggers above for their time and energy. I know how hard it can be to keep dragging yourself to the PC, to keep writing, to keep sharing; but I’m so glad that you do. Thank you.

I can’t wait to see who you nominate!

Have a ‘lovely’ day

OK so I’ve just noticed something and I had to share.

I’ve been blogging for a year.

Well over a year actually. I wrote my first ‘proper’ post on 7th July 2013. I remember writing it like it was yesterday, on my phone, sat in the Friary Centre Costa Coffee in Guildford. It was about Primark. Random I know. Do I share it again? I didn’t actually share it the first time round. It’s not really that interesting. But hey, I guess it’s kind of important because it’s where I started. In that case here it is:

I’m having an afternoon off from mummy duties and spending a bit of alone time in Guildford. I needed to get Oscar some more short pyjamas (as the ones our friend Becky bought him for his birthday are proving such a hit). So my first instinct was to go to M&S. They have always been a staple of O’s wardrobe, providing good quality basics at reasonable prices. So anyway I went straight there and got exactly what I wanted. Short pyjamas, three pairs, for £12.

However, as all my maternity/holiday/savings finally ran out this month I’m on something of a budget drive. It’s not that I wasted money before but one of the things I always worked hard for in my life was the ability not have to budget. But needs must and anyway I think “hmmm I wonder if Primarni has anything cheaper?”

I don’t often go to Primark. Not because I have anything against it per se, just as a plus size I’ve never found anything to fit me in there. I have also found the children’s section, particularly for young boys, to be woefully small, especially in the Guildford branch. But as I’m trying to careful with my pennies (well not my pennies but that’s another post) I thought I’d check it out.

It was a mistake and a complete waste of time. Not because, as I suspected, they had nothing I wanted. They did have some really nice little boy clothes. No the problem with Primark was the people in Primark. I’m not talking about the staff, who seemed present and helpful. No I mean the customers.

I know that makes me sound like the worse kind of snob and to some extent it is the people themselves. The kind who will leave their babies screaming in the buggy whilst they rummage for a bargain. It upsets me but who am I to judge?

No, I think its the environment that brings out the worst in people. The low prices somehow send out a signal that this store isn’t really worth caring about thus clothes and shoes and accessories are thrown about with complete disregard rather like a jumble sale. I even found myself taking less care than I ever would in M&S for example. It was then I realised I needed to leave, empty handed.

If you do want to, I think Primark is one to do first thing in the morning and midweek. Other than that I think I’m going to stick to M&S and shop the sales.

Blimey! Don’t I sound posh! I like this post. It helps me see how much I’ve developed my own style – one much less formal than I began with!

I had no vision of where this blog would go back then. I still don’t to be honest. All I know is it’s opened me up to so much more in life than I could ever have imagined. I always secretly harboured a desire to write. Not a novel, I don’t have the patience, but something. I kept extensive journals as a teenager and I’m so glad I did. I love reading them back now. They show me how far I’ve come, but also remind me of the time with such clarity I can practically smell the 50p shots of whiskey and taste the kisses of teenage boys. It’s powerful stuff. Maybe I’ll feel the same about these posts when I’m older, or more to the point when Oscar is older. I’ll look back and wonder what on earth I was worrying about all those years ago.

I think blogging has also helped me to find a voice. To look at my life, really look at it, and decide who it is I actually am, or want to be. I’ve been much more honest in writing than I ever would have been in person. But being honest with myself has made me much happier and positive in real life too. Someone came up to me a toddler group to ask me about this blog a few weeks ago and then proceeded to tell me why she wouldn’t want people knowing stuff about her. I could only say that whilst it’s not for everyone, being so honest with the world (and consequently yourself) is bloody liberating. I’m not sure she understood and to be fair I don’t think I would have had I not pushed myself to do this!

My last post was actually written on my bloggiversary (is that a word? It is now!). It was also my 100th post. 100 posts in a year? I’m pretty proud of that. Proud of the volume of writing and proud of the fact I kept at it. Yay me! However, I think I mentioned my lack of patience before 😉 and I’m certain that I wouldn’t have kept going had it not been for the awesome feedback I get from the people that read my words, you, every time I write. It baffles me and yet at the same time makes my heart happy. So yay you too!

So here’s to us. To a year of writing. And to many more years to come.

Just a really quick one today. I hit 100 followers yesterday. 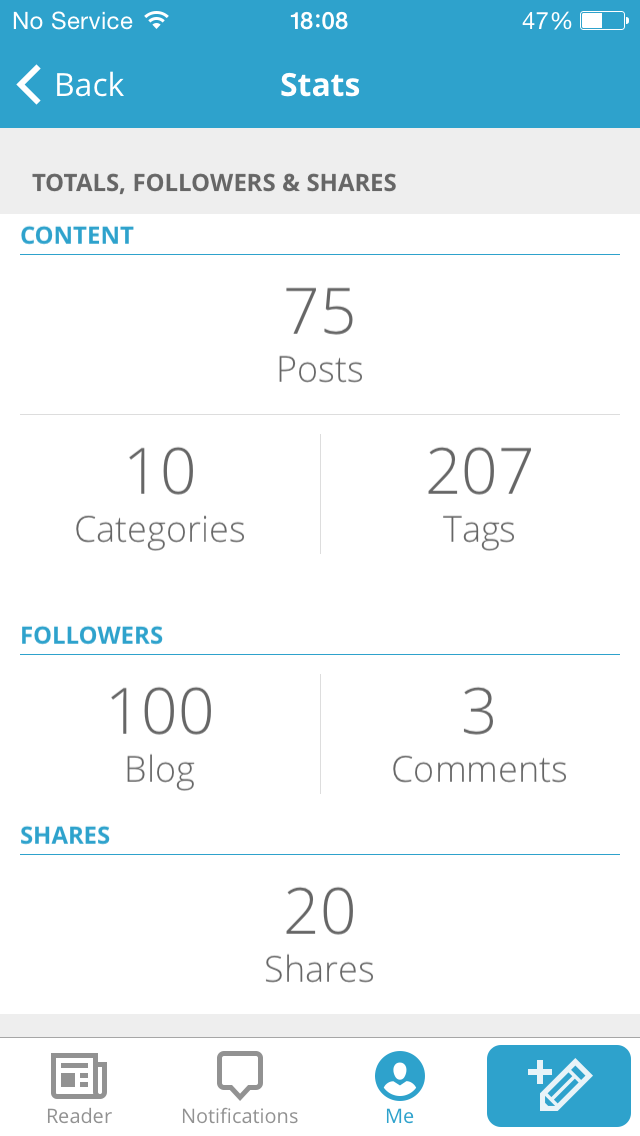 Now I know some blogs have thousands of followers and 100 might sound like a tiny number to some, but to me it’s unbelieveable

I started this as nothing more than a place to empty my head, a place to call my own. I never once suspected anyone would read what I wrote. And then when friends started to read links I posted on my Facebook I was supremely flattered and touched that anyone would take the time. But when strangers started not only reading my stuff, but subscribing to it. Well. I can’t really explain how humbled this made me feel.

In reality know I have more than 100 “followers” (I hate that term, makes me sound like a cult!). I have those who read links I post on FB or Twitter and like a good magazine I have those who read my blog from links that others have shared. My sister in law tells me that everyone in the salon where she works is following my SW journey through her. My friend in Moscow shares my journey with her parents back in the UK. It’s how the internet works. But to see the number there, in black and white – well it blew me away.

So I just wanted to say thank you really. A great big massive

Whether I know you read my blog or not, whether you’re here for the parenting stuff or the SW journey, whether you read every week or just dip in and out. Whatever bought you here. I want you to know that this blog has changed my life. And you are a part of that.