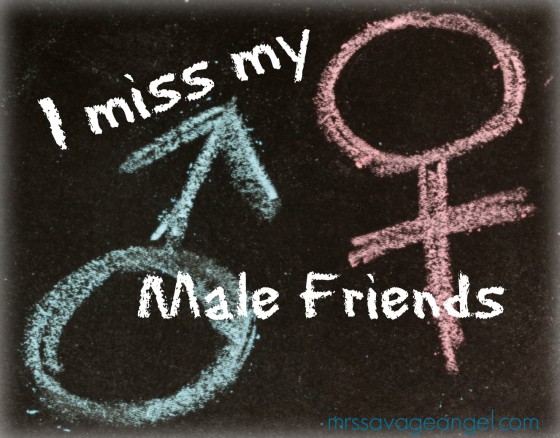 I’ve always found large groups of women slightly disconcerting. I don’t know why. As a teenager, I was only really happy when the group was well and truly mixed. My best friend in my later teenage years was a guy and since then I’ve always been more comfortable in groups comprised of both genders. It’s not that I don’t like hanging out with other women. I’ve had, and have, some amazing female friends over the years. I just always worked best, both in my personal, and my professional life, in a mixed gender environment.

Since becoming a mother, and particularly a stay at home mother, the opportunities for hanging out with mixed groups has diminished significantly and I realised the other day that I really rather miss it.

I keep reading on social media about the power of the all female group, how we can, and should, always call on our #queens, our mamatribe to support us in this motherhood journey. I read posts extolling the virtue of mummy friends and how important they are and while I can’t deny any of this, I wonder if I’m slightly missing something. Because nearly four years down the road, although I have become more comfortable in all female environments (and believe me if you can’t, motherhood, particularly stay at home motherhood, is NOT for you), I still miss having guy friends.

It’s not even like I have particularly tradiontional ‘male’ interests. I couldn’t give a toss about sports or drinking (gosh that’s terribly sexist isn’t it, sorry guys!). I just don’t seem to care enough about what groups of women seem to want to talk about. Which at my life stage, much of the time, seems to be Babies. And I don’t mean our children. You know I’m happy enough to talk about Oscar, but babies. New babies, wanting babies, trying for babies, feeding babies, missing sleep because of babies. I’m expected to be broody and when I’m not I’m left feeling slightly like I don’t fit in. And this is all before I even start to bring autism into the mix!

Guys enquire that yours is well and when it is, move on to something else. And sometimes that’s all I want. Just to talk about something else. I spend so, so much of my life talking about motherhood, I just sometimes want to change the channel. It’s one of the reasons I get on so well with my good friend Bethany. When we first started hanging out, I remember marvelling to Ben how I could talk to her about things other than our respective children. She got me talking about politics and culture and ethics and history and opinions. And her love of Scotland and gin, preferably together ? And I miss her so much now she’s gone back to work full time.

Because where else will I talk about stuff like that and feel comfortable doing so? It’s not every day you meet anyone, male or female, that you just click with. And the brief, snatched conversations at play dates inevitably come back to the thing you have in common; your children. And that’s fine. Just sometimes I miss the irreverent conversations you can have with a dude who couldn’t give a shit if you want more kids or not.

Unless he’s pissed and tells you can’t possibly have an odd number of children. Over and over again! ? In situations like that you start to wonder what your problem was. Groups of women aren’t so bad and you wish your girls would swoop in and save you !

Your wonderful, understanding mummy friends, that no mother should be without.

I was listening to a piece on the wireless the other day about the sense of smell and how it’s being used in the therapy for those with Alzheimer’s. It would seem a scent can access memories in a way simply nothing else can. And this didn’t surprise me in the slightest.

For example when Oscar was a baby (and still today when he’ll let us near his head!) we washed his hair with Burts Bees Shampoo. When the tiny trial bottle we started with was finished I kept the bottle in his special box, in the hope that should/when he stops using it and grows up I can go back to that tiny bottle, for a quick sniff and a remember.

Then I was talking to a friend this morning about her teenage son using Lynx body spray and it got me thinking about the iconic fragrance and what it means to me.

Firstly I still can’t believe it’s going! When I was a teen (and sob sob, we’re talking the mid 1990’s here) every boy I knew left a trail of unmistakable scent in their wake. It was sort of cheap talcy aftershave mixed with body odour. It’s teen boy to me. And here we are 20 years on and teen boys (or so I’m told) have yet to move on.

Which in one respect is great. It makes me giggle to think of teen boys smelling like their dads and uncles used to. It’s like some scented heirloom, a fragranced ancestory. Lynx, making teen girls cough since 1985 🙂

But in another respect it’s a little bit worrying. For me anyway. Lynx holds such a special place in my memory. Yes all the boys wore it but no one wore it like my biggest secondary (High) school crush. He was dashing even then, and always smelt of just Lynx (without the BO – maybe that’s what I liked?). I get one whiff of Lynx Africa and boom, I’m 16 and weak at the knees again. Not appropriate for a 36 year old married woman with a child! I was rather disturbed to hear the boys are still coating themselves in the cheap body spray before leaving the house. But then my friend told me the Africa scent has gone out of favour, well at least with her son’s friend group. Phew! I’m going to hope that this is the case the country over. In fact I’m hoping it’ll become so passe that Unilever will discontinue it altogether, if only for the benefit of 30 something women who can’t smell it without getting a completely involuntary reaction up their spine. I mean, there’s no way my own son can ever wear it. It has to go!

Although, I may go and buy some, to keep next to the bottle of CK One, in my memory box. 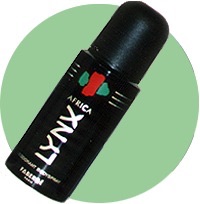 My son is three years old. And like any other three year old (or is it just us?) has just discovered how HILARIOUS farting is.

He laughs whenever he does it and laughs even more if he gets a reaction.

But now he’s started laughing at anything that even sounds like farting!

Here’s collection of pics of (a rather grubby faced) him, laughing at me blowing bubbles through a straw into some squash. 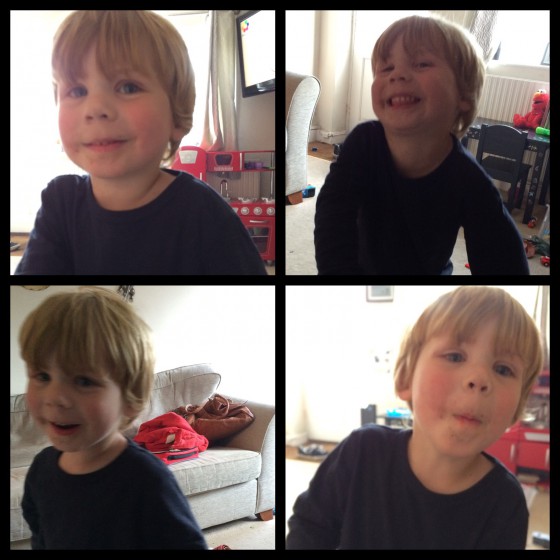 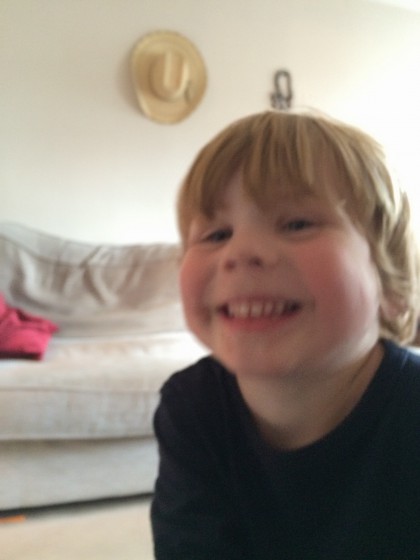 It’s not sophisticated humour, that’s for sure, but it makes him (and his dad, who has yet to grow up it would seem) very happy.

So OK. Here’s the deal. There’s this tea set. It’s Fisher Price (a well known solid children’s brand) and it’s sweet and quite clever (as far as a tea set can be). The teapot makes noises like pouring water when it’s tilted. It also sings and talks, with an emphasis on manners (please, thank you, stuff like that). It comes with two cups and a plate with three cakes, each a different shape (a very basic shape sorter). We’ve got several friends who have this set and the boy LOVES it. He loves the noises it makes and in some kind of primeval way, he loves ‘making the tea’ (which is super weird as we don’t drink tea in our house and he’s certainly never seen a teapot in real use!). It’s gorgeous and clever and fun. 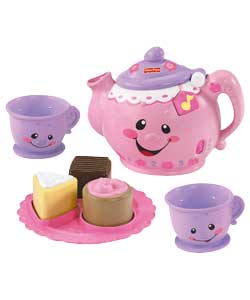 Not only is it made in a traditionally female centric colour pallette, but check out the frills and flowers. It couldn’t be more clearly aimed at a female market than if it (and here come the generalisations girls) covered itself in chocolate and kittens.

But why is it?

My son is not the only boy I’ve seen playing with this set, or any other catering based toys for that matter, regardless of their colour or design.

And don’t we want our sons to be polite?

This set is called the “Fisher-Price Laugh & Learn Say Please Tea Set”. One of it’s features is to “teach babies about.. manners, greetings and more”. Surely this is a toy all children could enjoy – after all manners matter! So why is it so very very very obviously a girls toy?

Or is it? Should the colour and design make a blind bit of difference to who plays with it. Should it matter to me? It clearly doesn’t matter to him. He loves it, it’s a really well made, smart toy. Why should I even be having this conversation? Why I haven’t I bought it for him already?

The answer is I don’t know. Something has stopped me. The signals this toy sends out to me as a parent is that this is not for my child. I feel it. On every level. And I hate that I do. What am I worried about? That other parents will judge me? So what if they do.

I’m so confused and conflicted.

I’ve spent my life, not caring about gender stereotypes. I fit them when I choose to. I have friends who fit them and those who don’t. It never bothered me. Last summer I put Oscar in a fluorescent pink t-shirt. Being blonde, it looked fab on him.

But I know he and I got some questioning looks when he wore it out and one woman in the park felt the need to congratulate me on being brave! Its a colour for god sake. What’s brave about that. Its doesn’t MEAN anything. Does it?

I know the parents of little girls who totally don’t have this problem. Their daughters wear blue and have trains, cars, blocks and a whole host of traditionally “boys” toys. It doesn’t bother them and their girls love them. And I say hooray for that. Who the hell wants a daughter that grows up thinking the only way is Barbie? So why should it be difficult for me to put my mind into the place where buying Oscar a pink tea set, or a doll or any other traditionally “girls” toys is OK?

The honest answer is I have no idea. And that makes me just a little bit sad.

So anyway, back to the tea set. It’s annoying me for two reasons

2) That it’s bothering me enough to write this

It’s his birthday soon and despite all the rationalising I’ve done both here and at home, I am still unsure as to whether to get it for him. I want him to grow up to be a great host, a caring father. Why then won’t I give him the tools to practice these skills the way we do our daughters?

What would you do?