A few months ago I started going to a local Cake Club, run by the friend of a friend. The idea is once a month we all get together to eat cake and natter. It’s that simple really. Everyone who comes must bring some form (any form) of cake and each month we have a loose theme to inspire us to try a new recipe. I love that part of it. I mean I love making cake, but how easy is it to just fall back on one or two tried and trusted recipes? Having a theme gently guides you to consider bakes you perhaps wouldn’t have done otherwise. This benefits not only the baker, but also the rest of the group. It’s made for some really interesting evenings, and even more delicious cakes to try!

This month’s theme was Vegetables (and Fruit), a cheeky nod to the healthy eating that tends to go on in January. We also welcomed, for the first time, a member who cannot eat gluten. As soon as I heard these two things I knew I had to make my friend Bethany’s Sweet Potato Brownies. Gluten and Dairy Free, I’ve made them once before, when Oscar was eating a GF diet. This time I have tinkered with the recipe ever so slightly and boy do they make the most moist and intensely chocolately morsels. I urge you to give them a go, whether you need a GF recipe or not.

On a side note, I have found these to bake much more evenly than traditional brownies, which I always manage to over or under cook. Always a plus!

Although you can microwave sweet potatoes (like you do jacket potatoes), I have found that baking them from raw, gives a much sweeter result. Prick the potato all over and bake on a foil covered tray at 230/ Gas Mark 8 for an hour, turning half way through. When done, peel, mash and cool before using. 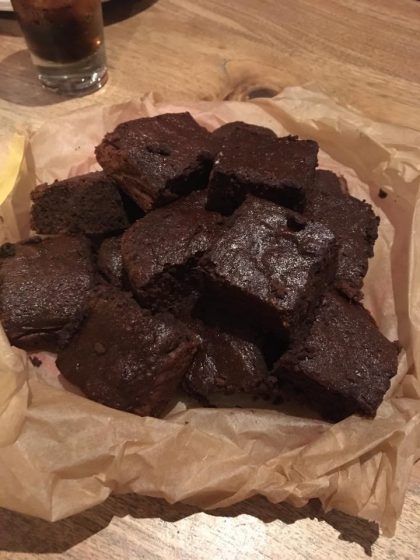 These brownies are delicious with a cup of coffee and a sense of smug satisfaction that you’re practically eating one of your five a day.

I’ve not had much luck with gluten free cakes so far. They’ve been OK, pleasant enough I suppose and Oscar’s been happy enough to wolf them all down, so they can’t have been that bad. But I don’t know, they just didn’t taste quite right, if you know what I mean. So I decided to give our family favourite a gluten free make over and see if I couldn’t make a really good gf cake.

Ben’s absolute favourite cake is Chocolate Banana Bread. It’s a slightly tinkered with version of this Nigella staple and I’ve made it many times. It’s great fun to make, primarily because I love squishing the bananas, and so I thought Oscar would enjoy it too. We gave it a go two weeks ago and it was such a roaring success, with everyone who tried it, that we’ve made three more since. And not one has hung around for long! It has a moist quality I’ve not found in other gf cakes and using good size overly ripe fruit gives it a wonderful banana sweetness.

So just for you this is our gf version of the best banana bread you’ll ever taste.

As in previous recipes we used my Kitchen Aid, but you could also do this by hand.

We assume it lasts well for a few days in an airtight container blah blah blah….. It’s only lasted a few days wrapped in foil in our house. Absolutely delicious when the boy’s gone to bed, sliced thickly, warmed in the microwave and severed with Vanilla Ice Cream!

Like most nurseries (I guess), Oscar’s preschool celebrates each and every birthday in their midst. They invite the parents of the birthday child to come in and watch their child’s special day be celebrated by their friends (my guy’s school also carries out something of a rather abstract birthday ritual. The child carries a globe round a circle of children as many times as they are years old, whilst they all sing a song about the world. Yeah I’m not sure either, but the kids seem to like it). Said parents are also invited to provide a little treat for the children. I was so excited when I heard about this. What a lovely thing to be able to do and it was definitely something Oscar and I could prepare together. However, as is to be expected, the nursery have pupils with all kinds of specific dietary requirements. Oscar himself eats gluten free and he has a little pal who has a serious broad spectrum nut allergy. Meaning anything we chose to make had to be pretty well thought through. To the Googles!

As Oscar got so many lovely cookie cutters for his birthday, I decided it would be fun to let him try them out. That’s when I found a great biscuit recipe on the American site Momables.com. It was written to be purely gluten free however, I checked with Oscar’s pal’s mum and found the recipe was also completely free of nut contaminants too. Perfect.

I followed the original recipe, which being American, was measured in cups. However, because I’m nice like that, I have converted it to grams here for the baker who favours the scales.

I use Dove Farm Gluten Free Plain Flour and Xanthan Gum to great effect. You could also add spice such as cinnamon, if you were making these near Christmas

I used my Kitchenaid mixer, but you could do this by hand

In the end I chose to make all heart biscuits as I reckoned they were a decent size. I got 24 out of this recipe, plus a handful of the smaller shapes you can see Oscar cutting above.

I decided to “decorate” them with a simple water icing. Unfortunately I had to do this when Oscar was in bed, but I totally plan to let him have a go next time! I think I used around 60g of icing sugar and a couple of tablespoons of water mixed to make a smooth paste, runny enough to drizzle. I used a couple of drops of Wilton colouring to get the amazing blue, then just drizzled the icing from the end of a spoon onto the biscuits at an angle. It did take a while to dry though so be factor this in when planning timings.

They went down a treat with Oscar and all his pals. As one of his little friends told her mum “they had blue on them and they were yum”. What more could you ask for?!

Since I was a little girl I’ve loved baking. I may have mentioned this before 😉 . My first foray into the kitchen was an independently made Victoria Sandwich at around the age of 7 and I’ve never looked back. Of late my baking has taken something of a back seat, due to a focus on healthy eating and losing weight, but I still love and occasionally miss the process of taking a seemingly innocuous bunch of ingredients and turning them in to something that look, smell and taste amazing.

Last week we had a couple of days where the weather wasn’t so great and decided to stay indoors, not something you do lightly with a toddler. First plan was to make a new batch of Moon Sand (our first attempt at which I wrote about here). This time however Oscar showed much more interest in the actual process of making it. To the point where I got him a chair, pulled it up to the work surface and let him pour the cornflour in to the pan. He even, after a while, gave the whole thing a stir. He was mesmerised by the process and that got me thinking.

On Thursday it snowed. Not particularly badly, but enough to stop this wimp of a mother wanting to go out and so I decided to let the boy have a crack at baking. I chose a recipe that utilised what I had in the house (which did not include eggs. I know, eggless baking? Challenge accepted!) I found this recipe for Oatmeal Raisin cookies over on the blog, TransatlanticBlonde, whose son is allergic to eggs. It was a great one to start Oscar on, as the measurements were in cups, which needs minimal fuss (although I can’t help it, I prefer grams and scales. I guess it’s just what you’re used to). We switched the plain flour for Dove Farm gluten free plain flour (as Oscar is eating GF at the moment) and left out the vanilla (as we didn’t have any!) Any who, I scooped the ingredients out and Oscar poured them into my giant Maslin pan. I chose to use this rather than a mixing bowl because of its wide base and large capacity, meaning Oscar could really see what was going on as the mixture took shape.

And look at what was going on, he really did. I can honestly say I’ve never seen him so attentive to an activity we’ve done together. And we really did do it together. I’d measure, he’d pour and we’d stir. He was even repeating words I was saying, such as “OK, “so” and “now”. Believe it or not he even had a crack at “Cinnamon”! At no point did he get bored or look away or want to do things ‘his way’. Even when I was scooping the mixture onto the baking sheets, he watched until the very last one was done and in the oven. And he watched as I took them out the oven, interested in what happens now. And when I let him have one, well… Let’s just say his new word of the week is “cookie”!

I never expected baking to be such a resounding success with my boy, but that’s the thing I guess. You never know until you try. It’s been such as success in fact that we’ve just made another batch, using a (slightly more complicated) recipe from Jamie Oliver. He was just as involved and interested as the first time round. And really what could be more gratifying than throwing a bunch of ingredients into a pan and having cookies come out at the end?

I think we may have found a shared love. I can’t wait til he’s old enough to stay up for Bake Off with me!