I’ve been doing this blogging lark for a while now. When I started out, this blog was supposed to be nothing more than a place to dump my thoughts and to get stuff off my chest that simply had no where else to go. I never set out with an agenda. I didn’t start this to be ‘a blogger’ I started to give myself ‘a space’. The lack of a derivative of the word ‘mummy’ in my blog title should tell you that. My blog is me.

So imagine how alien I find the concept of finding ‘a niche’ for my blog? But this is what successful bloggers are advising now. I can understand why. The market place is crowded for one. Having a ‘thing’ will make you stand out in the, to be honest, noisy crowd. And I don’t know, maybe people want to to be able to compartmentalise their lives in these days of ultimate connectivity. A case of ‘I get this from her’ or ‘that from him’? I guess. But, do you know what, I don’t buy it.

I want to read about people. About everything in their lives. I don’t follow a blog for their niche. To be honest I don’t really follow any blogs that I don’t enjoy reading. I want that person to speak to me, to hear their voice in their writing. And it doesn’t matter how much you pigeon hole yourself, if you can’t write a coherent, interesting piece that speaks to me, regardless of subject, I just won’t come back.

The best compliment about my blog I’ve ever received was from distant family member. They told me they’d been reading for a while and had absolutely no interest in the topics I was writing about but just couldn’t stop reading. It blew me away, but confirmed to me that I don’t need to pin my colours to any one subject.

Yes I write about being a parent. My stay at home life means parenting is a huge part of what I do. And in that I also write about Autism, what it means to our family, the dizzying highs and the stomach churning lows. But hey I write about me too. I am more than my family, my child, than his diagnosis. I refuse to squash my square life into a round blog hole. It’s messy and confusing and full of heartbreak. Just as it’s bright and exciting and full of achievement.

My niche is me. And no one else can write about that. 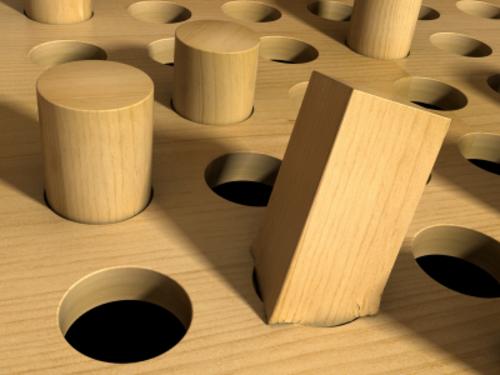 I’ve always been a pretty honest person. I’ve never been in trouble ‘wiv da law’ and I was rarely in trouble at school. I’m not suggesting I’ve never broken the rules. Yeah I taped stuff of the telly and didn’t erase it after 28 days (man I’m showing my age) and I found a wallet in my teens and didn’t hand it, or the money it contained, in (I’ve paid for that though having had my wallet, which also contained my birth certificate, taken after I left it on a bus seat). I am not great at lying convincingly, despite working as a Account Manager for four years. But I have been known to tell the odd white one here and there, often to make things “easier” or to protect someone else’s feelings. However since having Oscar, I’ve found it harder to lie. I’m not talking about the Santa or Tooth Fairy myths we tell our children, but day to day, with my friends, family, myself.

I think it started after I had him. I was so tired, so drained that I could just about manage bare minimum functioning capacity. This included breathing, moving, you know, the basics. Anything else above this in terms of necessity took something of a back seat. I remember in the early weeks, Ben coming home from work one day and telling me about an issue he’d dealt with at work. We’ve always debriefed about our respective days, it was just something we’d done. I turned to him and said, and I quote, “I’m too tired to even pretend I care – you know I would usually but I just can’t do it”. It was harsh and probably hurtful and I am so sorry (now) if this was the case, but it was the truth and I had nothing in me to censor that truth coming out.

As Oscar’s got older, my functioning capacity has slowly returned. I can remember my name now, what day it is, I have regular meals and most importantly decent sleep. But raising a child, basically living for two people (I have to remember to feed, water, change, care for the two of us), means I still don’t really have the capacity or the desire to lie. Having had the bullshit stripped back has made me realise that for the most part I simply can’t be doing with it. I’m not suggesting telling the truth at all costs (er no sorry I don’t think your child is beautiful, I think they have a big head) but I have found myself wanting to be more honest with people and myself.

I can’t be doing with getting involved in mummy politics (not that I have, but I hear its on the horizon from friends with older children), I want to be honest with my blog and don’t want anyone to read it and think my life is perfect or idealised, cos it’s not. I want to spend time with people I actually like and not those I don’t (so if I want to spend time with you it’s because you’re a good egg). I want to continue to lose weight and be honest with myself over how I’m doing, and the outcomes that I choose for myself. I wont go along with plans if they do not feel right for me and my family. I want to take full responsibility for choices I make. For me, for my life.

I know none of this sounds typically British, the stiff upper lippedness everyone goes on about, putting up with shit because that’s what we do. But why is that what we do? Why is it seen as ‘not the done thing’ to be honest with yourself? I have been so tired that I could no longer keep that up. I have seen the other side people, I know what it looks like. And I liked it. I want Oscar to grow up able to express himself, to be honest with himself and those around him. I don’t want him to think the lies are the only way.

I would also very much like it that one day he be so tired he can barely manage to hold his head up and remember who he is, because that will mean he is a new father.