I know, I know, March has been over for nearly a week already. Where does the time go? Here are just some of the things Family Savage have been loving in March 2016!

March for us was largely focussed on Easter and going down to Plymouth to stay in the same apartment we stayed in at Christmas. Our plan was to spend some time as a family in our childhood home town and to also celebrate Oscar’s birthday (a week early). And did we ever. You’re never sure if staying in a place that was brilliant before, will be so good a second time. But this time, at least, it was just as awesome.


We watched the boats in the marina, we went walking up on the Dartmoor, we had take-out Wagamamas (twice!), we visited the Aquarium, we celebrated Oscar’s birthday and we saw all the people we love. It was only a short break but it was wonderful. And leaving was just as hard as it was at Christmas!

I’ve known that Oscar was growing out of his Maxi Cosi Axiss car seat for a while now, but I was so desperate to keep him in the harness style seat for as long as possible, that I kind of ignored it. I was convinced he’d just undo a plain old seat belt. Anyway we recently realised we were having to force Oscar’s shoulders under the headrest to get him in and that the buckle between his legs was starting to strain. I had to capitulate. He needed a bigger seat.

So after extensive research, both online and talking to other parents we decided to go with the Solution M-Fix by the German company Cybex. We just felt it looked more like a seat than some of the more open style ones. More comfortable and more protective.

When it arrived I was so impressed – it was really lovely. But I couldn’t get over how big it looked. It should last him until he’s 12 (apparently), and the first time he travelled in it I could see how much more space he had. But it also made me realise how big he is getting. And how much he’s not my little baby any more 🙁 I have to say though he’s loving the space the seat affords him. And he’s never once tried to undo the seat belt! Although he has worked out that he can lean forward in it and pull the belt loose. What can I say, its a work in progress!

3 Just Being Me T-shirt

Last year a lady I met through Instagram, Chrissy, collaborated with the illustrator Cheryl Rawlings to produce two t-shirts to raise money for The National Autistic Society. The charity is one close to my heart obviously, but also to Chrissy’s as her daughter Esme is also autistic. I desperately tried to get hold of one of the tees for Oscar last year, but they sold out in record time and despite them having more printed I just wasn’t able to get one. 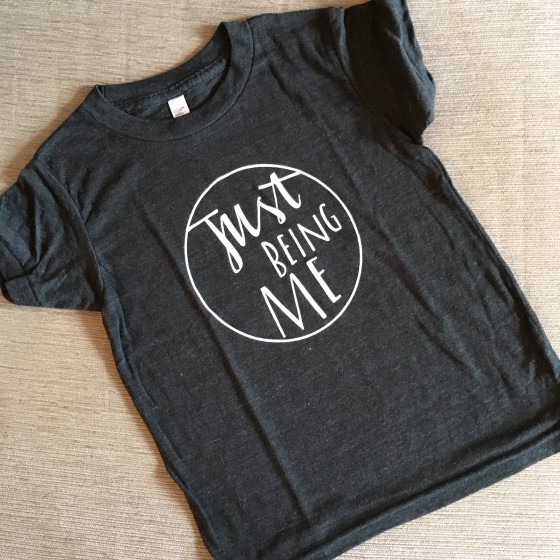 Anyway this year Chrissy decided to reproduce the t-shirts under her new company Raspberries and Raindrops. Proceeds now go towards her daughters private ABA therapy. I was thrilled I could finally get one for Oscar. I’m not a big fan of ‘Autismwear’. I don’t agree our children need branding. But I love the sentiment of this one. Because it’s all Oscar ever is; just being him! You can find this t-shirt at Raspberries and Raindrops

We discovered the Royal William Bakery when we stayed at the Royal William Yard at Christmas and were so excited to go back again when we returned this Easter. It’s such a wonderful place. The food is superb and generous (croissants as big as yer ‘ed anyone?) and the staff relaxed, knowledgeable and friendly. I love their ethos of ‘talking’ and building relationships. The seating is all benches and the service, well you have to get in that kitchen and talk to the chefs. And there are no ‘bills’, you have to talk to the staff when you’re ready to pay and tell them what you had. I know this might make some people uncomfortable, but I think it’s awesome.

When we visited over Easter the guys in the kitchen were really helpful in selecting the right loaf of bread for Oscar’s party, keeping it to one side fresh out of the oven. And I can seriously tell you it was some of the most delicious bread I have ever tasted and not a scrap was left by the end of the day. We love the Royal William Bakery and wish we lived closer (even if our waistbands are grateful that we don’t)! If you’re anywhere near Plymouth, I urge you to pop down to visit them. Especially for breakfast! 5 Joules Knitted Poncho

At the very end of February, I had a day on my own shopping in Guildford. As I am want to do in these situations I sidled along to Joules, just to have a little look you understand, nothing more. While I was doing just that, I happened to brush up against a poncho. Grey, cable knit, chunky as you like and oh so soft. It’s definitely not something I would normally look at. For one I am highly sensitive to wool and most commercial knitted garments make me want to scratch my skin off within minutes. And really it’s just not my usual style (whatever that is!). Any who I looked at it, thought how lovely it was and moved on. Then, I went back. I decided as I was on my own and with time on my hands, I’d try it, just to ‘see’.

Well I was slightly bowled over by how much I loved it. Although it did have a small wool content, I tried it on with only a vest underneath and it didn’t make me itch once. I was in love. Only trouble was the price. I knew I needed other stuff that day so I sadly put it back on the hanger and carried on. Problem was I couldn’t stop thinking about it and a few days later decided if I used my freelancing money and a discount code Joules cleverly sent me, I could just about afford it. So I ordered it online. And I’ve worn it pretty much every day since! It was the best purchase I’ve made in ages. I wear it everywhere and with anything. I really do think it was worth every penny. A friend of mine recently was able to get a navy version in the sale (clever girl), but on closer inspection, neither are available on the website now. They may still be available in the shops though 🙂
What have you been up to this month? Anything you’ve fallen head over heels with? I’d love to hear all about it!

I was not paid to endorse any of these brands. I paid for all my favourites myself. I just like sharing the things I love.