May is here are the weather has (occasionally) been fantastic! Honestly, when’s it’s been nice, we couldn’t have asked for better. A warm sun with a gentle breeze. Perfect! It’s allowed us to do one of the things we love the most, which is get out in our garden. It’s is so much bigger than the house, that when the weather’s nice we tend to gravitate out there, to play, relax and soak up some vitamin D. And when we can, we also love a good barbecue. We had the first BBQ of the year last week. Ben’s very proud of his BBQ. I call it the behemoth, because not only is it a grill, but it’s also a smoker too. If you’re interested in smoking or slow barbecuing you can read my post about it here.

It’s a proper man toy and a few years ago Oscar bought Ben a snazzy set of BBQ tools (in their own case that look something like an assassin might carry) for Father’s Day. Ben was thrilled with them and they’ve been used every barbecue season since, to turn the food and prod the coals. They were a good present!

But I’m never sure what to get Ben for Father’s Day and I always leave it to the last minute. I’m hoping when Oscar’s older he can have some kind of input or even better make him something so I don’t have to make the decision, but for now it’s my job. I’m trying to get ahead of myself this year with some ideas. But where to start? I decided to looks at previous year’s gifts and see if I can get any inspiration from those. And if you can too, well that’s just dandy!

Ben’s first Father’s Day and Oscar was only two months old. All Ben (and I) really wanted that year was sleep. Oh precious sleeeeeep. But as that wasn’t going to happen, I went for a keepsake instead, buying a cast of Oscar’s tiny foot from a local company called Little Impressions. I have to say this was a perfect first Father’s Day gift, but I probably wouldn’t have bought it any other year. Although it was quite expensive at the time, I’m really glad I did it. Isn’t it gorgeous?

I wanted to get something a little bit personal to Ben and Oscar and by chance had taken this photo on my phone a few weeks before Father’s Day. It’s not the best quality photo, but Ben loved the image, especially as he didn’t know I’d taken it. I got it printed through an online printer (Photobox I think) and the frame from Homebase.

As I mentioned I was inspired by Ben’s purchase of the BBQ just before Father’s Day with this one. It’s less personal, but very ‘Fatherly’ and it was received just as well. I bought it from Amazon, but I’ve seen for sale it in various places.

Last year I had already bought Oscar a tshirt from Little Bird at Mothercare when they released a limited edition, Daddy size version just in time for Father’s Day. My guys had never done twinning before, but how cute is this? Even more cute was that Little Bird chose my Instagram picture of the boys in their tees for their Father’s Day Post. This was a lovely present and even though Oscar has grown out of his (boohoo), Ben still wears his.

So there we go. Seems I like personal gifts or those that are practical. And I think they’re the kind of gifts Ben likes too (although I think he probably prefers manly, Fatherly gifts) And short of buying him a flat cap and a pipe here are some of the ideas I have had for this year.

I love this bunting from Bonkers for Bunting. What a super idea for decorating for Father’s Day and if the Dad in your life has an office or a workroom or even a shed they spend lot of time in, what a lovely decoration and reminder of their children’s love all the year round. I love that these buntings are completely customisable, so if you would prefer Daddy or even some other name then they can accommodate you! Plus they’re all handmade with love by a mumtrepreneur down in beautiful Devon. What more could you ask for? 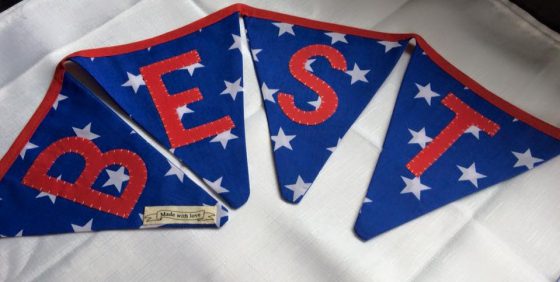 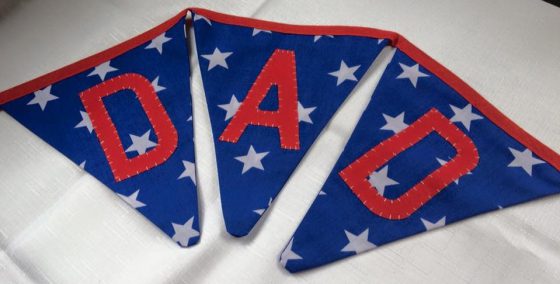 If the Dad in your life likes to think that he’s handy, but is really more of a hacker then how about some Sugru, the crazy mouldable glue made for life hackers. This stuff is mind boggling, both in it’s properties and the amount of incredibly useful things it can be used for. It starts out soft like putty but dries to a hard but flexible, waterproof, cold proof, heat resistant to 180°C rubber, that sticks to most materials. I’ve been trying to think of things round our house that need Sugru and the more I think the more I come up with. Frayed cables need mending, the freezer drawer is cracked, pan handles need fixing, the rubber feet on the toastie maker need replacing, seriously the list goes on. Ben is a keen gardener and you know how gardeners love a good hack to help them grow their veggies, so I can imagine this would also be really useful down at the allotment!

In case I haven’t described it very well here’s a fab 89 second long explanation of what Sugru is!

They produce all sorts of different size packs and kits, but if you’re new to Sugru then maybe the Starter Kit is for you. 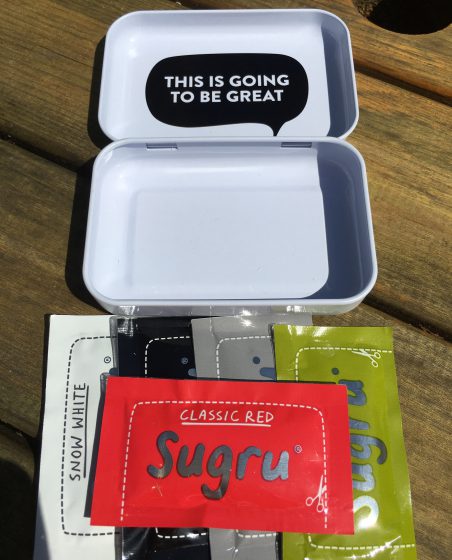 So if the dad is your life loves to fix rather than replace (and good on him if he does) or just likes to save a bit of money along the way, this is the gift to help him do just that!

Hope these ideas have been of some help. Let me know what you’re thinking of giving this Father’s Day. I’d love to know.

I would like to thank Sugru for gifting me the Starter Kit to try. None of the other products were gifted to me.

I was not paid to write this review and as always my opinions are my own.