Half term has been and gone and while Oscar definitely showed me that he was missing the routine of school, he did really well and we had lots of fun.

We started the holiday with a lush visit from Ben’s sister and her two little ones. I love my niece and nephew so much and watching Oscar play with them (sometimes happily, sometimes grumpily!) just makes me so happy. We had such a lovely time, I was even willing to forgive that they both asked over the course of two days “Auntie Lisa why is your house so tiny”. Out of the mouths of babes I guess!

We took them to our favourite hangouts while they were here, including Applegarth Farm and Dylan’s Milk Barn. Rachel said she felt like she knew Dylan’s already having heard me talk about it so often. I might start charge Ben, the owner a PR fee!

Once they’d returned home we had a lovely visit from our old Home Start Volunteer. Despite being released from the programme that helps preschool families, our wonderful Rent a Gran (as I lovingly call her), was worried about how Oscar had got on since starting school. It was so touching to know she’d been thinking of us. She popped over for a catch up and bought me such a lovely begonia. It reminded me of the one’s my own Nanna would always have in the house when I was small.

We finished the week with a short trip down to Plymouth to see some friends. Oscar loved having a sleep over with their daughter and they played so nicely (he kept asking for her once we left). Our friends couldn’t get over the improvement in Oscar’s language. When you hear it every day it’s hard to remember just how much has changed in such a short space of time.

We couldn’t go all that way without a trip to Oscar’s absolute favourite – The National Marine Aquarium. You might remember we went at Easter and I kid you not it’s the only place Oscar has ever asked to go back to. Again and again! Periodically since April he’s just asked “We go Quarium?”. It’s been heartbreakingly cute. And so we planned to take him for the last hour when we arrived on Friday, as we did last time. And like last time we didn’t have to queue and we kind of tailed the majority of the other visitors. Or rather we would have, had Oscar not just been sat in a car for four hours. He went in at top speed and raced around glancing at the tanks as he flew past. When we got to the end he announced he needed the loo. So we found one near the beginning and when he came out, we just started the Aquarium all over again, this time much slower. It worked a treat!

The staff at the NMA were just as lovely as always. I realised half way down to Devon that I’d forgotten our DLA and Carer’s letters to prove we were entitled to concession tickets. Just in case, I tweeted them to ask if there was any other way of getting the concession price. I was told to ask for Olly at the desk. When we arrived we did just that and he told the front of house to waive our fee. It was just so kind and much appreciated. Thank you Olly!

Out of interest I also saw this while we were going round. I’m gutted we will miss it again, but if you know anyone who may appreciate a quieter session at the National Marine Aquarium then the next one is on 16th November. Find out more here. 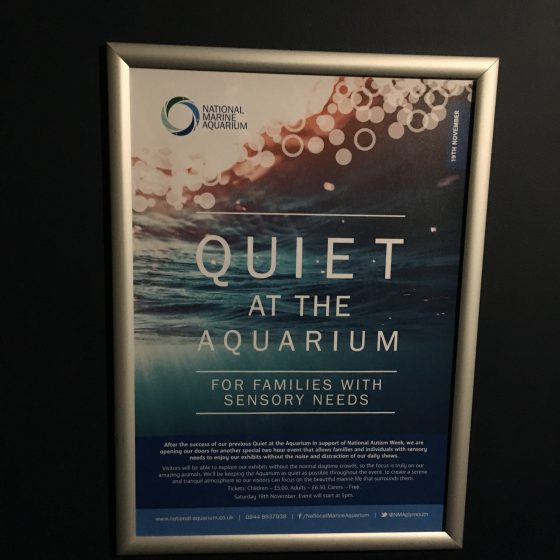 We finished our stay with a family bonfire at our friend’s dad’s beautiful cottage just outside Plymouth. We had an amazing bonfire, a bbq and a chance to catch up with friends we’ve known for years. And I mean years. I met our hosts sister on her first day at secondary school. 26 years ago! It was so lovely to see everyone and to watch our children get to know each other. Oscar was nervous of the dogs to begin with, but once he started playing with the children he relaxed and stopped noticing them. He had so much fun. And it was a night of firsts for him too. His first sparkler, that he loved and was very good with (with 100% supervision) and his first McDonalds, that he didn’t like at all. Fair enough. Thank you to the Pringle clan for making us so welcome. As always.

I was worried how the holidays, the first break from school since he started in September, would go. And I know I definitely saw some signs that he was missing it, but really, he coped amazingly well, showing off his improved language and social skills. And despite being ill this week (impetigo apparently, no I didn’t know what it was either!) he’s had a great return to school.

And today he had his first fully dry day without accidents since he started.

This year just keeps getting better for him!