What a shocking start to June hey?! Its blooming awful where we are but I’m pleased to inform you the trampoline is still where we left it, despite the wind. I tell you I’m relieved we had our gutters professionally cleaned yesterday. They’re working over time now!

Oscar’s had a terrible week or so, with all recent the changes in routine. I think he’s just telling me he’s not happy about it. His return to preschool, which I thought would bring him some relief, actually didn’t seem to be the magic wand I hoped it would be. As soon as we turned into the school’s road, he started squirming and crying and shouting ‘Uh Uh’, ‘Uh Uh’. I eventually talked him into getting out of the buggy, but then he insisted on being held and would not get down or even be passed to his favourite Miss Tasha. I guess a lot of children go through this when they return to school after any sort of break, but it kinda threw me. He’s never, ever been clingy to me the whole time he’s been going there. Not on his first day, not after Easter, never. And I guess I handled it badly. I stayed with him, less for Oscar’s sake (I fully appreciate that children are often fine as soon as their parents leave) but more that I didn’t want the staff to potentially have to deal with a true Autistic melt down first thing on a Monday morning!

So I stayed. I went in the garden with him and told his TA all about how amazing he was on our recent trip to Wales and he calmed right down. So then I tried to leave and he started all over again (see I told you I handled it poorly!) Anyway eventually I managed to leave him, and was grabbed for a quick, impromptu meeting with his EYIA (local authority lady) who was visiting that day. Which was fine, until I heard Oscar screaming outside the room we were in.

I know I should have left it. Let the staff deal with it. But I just couldn’t. I jumped up and practically ran to him. Which, of course, made things worse and worse. Eventually I asked his TA if she just wanted me to stay, but she (quite rightly) said it would be better for me to leave, or he’d expect me to be there every session. She assured me she was prepared to deal with any melt downs and so I left. In a great big mental tizzy. I wasn’t upset, so much as confused and.. well no I was upset.

You see I don’t cope well without the surety of his routine either. I’ve always needed to know we had things planned from his earliest days, but the older he gets the more I need the small amount of time I get without him. Two weeks being ‘on’ with him has been exhausting. I feel the disruption in the rhythm of our lives just as keenly as I suspect he does. By the end of last week neither of us were coping very well.

I was totally focusing on him going back to school, rather selfishly, for my own relief. When it didn’t work out how I expected it threw me kinda sideways, I wont lie to you. So when I finally left him I did what every good 21st Century mama who has an hour to kill does. I headed to a favourite haunt, ordered coffee, a granola bar (granola’s healthy right? 😉 ) and dived into social media. I thought I might write a post, but it turned out having a rant/laugh on Twitter, was much better for the soul that day. 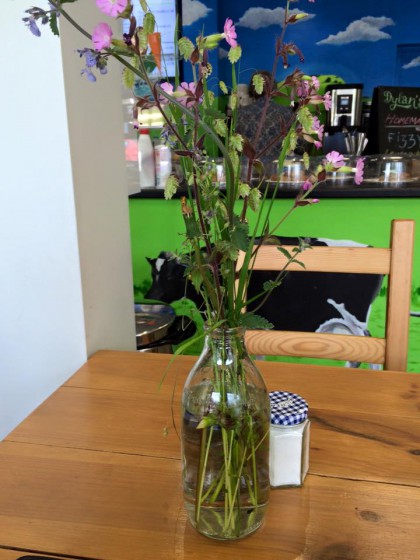 I returned to collect him feeling calmer but actually quite apprehensive as to what I’d find and, more importantly, be left to deal with for the rest of the day. His teachers told me he’d calmed down eventually, although had continued to ask to leave. He was pleased to see me and keen to get in his buggy, which in itself is unusual, but they were right, he was calmer. The tears were gone and he did seem much more relaxed.

So maybe it just took him a while to figure it out. To hear the beat that we usually live our lives by and start to dance in to it again. I don’t know. I’ll probably never know. He’s been much calmer the rest of the week too (despite the filthy weather). Monday left me dreading Friday’s drop off. Now I’m just aware it might hard. And being aware means I can change my expectations and plan to act accordingly.

What’s the betting he runs in without a glance back, like usual?

Hope your back to school’s went well and your children are finding their rhythm this half term.