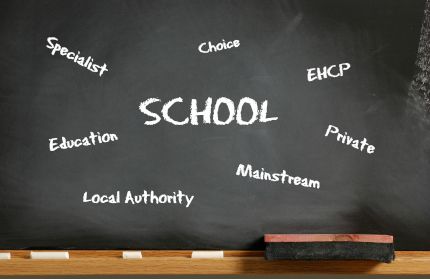 I went to look at a primary school yesterday. The first one I’ve been in, since I was a pupil of one! Oscar’s needs, moving forward are obviously going to be a bit different from your standard pupil (not that I actually believe there is such thing!). But either way, I need to look at school options and I need to start doing it now (or depending on who you speak to I should have been doing it ‘ages‘ ago). Anyway, in order to abate some of the panic that was rising, I made an appointment to go and see a school. Just to have a look. Just to start the process.

You see when I was a child you went to the nearest school. You didn’t have a choice. In fact I lived in a village and we really didn’t have a choice. You went to Balsall Primary or you went private, but that meant serious travelling. And no one really questioned that. The school was good. Hell I thought it was great, but the decision to go there was not really a decision at all. It just was. However today, even in a small town like Haslemere, there is a serious amount of choice, of both state and private schools. Add to that the possibility of specialist provision and I suddenly find myself on the end of what feels like an enormous decision. I know all parents today have more choice in primary schools than, for example, my parents did for me but the process of viewing and deliberating and worrying seems to come down to either what you can afford (if you plan to go private) or what you’re offered (if you’re not). Or am I over simplyfying? At the end of the day you can lust after a state school all you like, but if they don’t offer it to you, even after you appeal, you don’t get it. Your choice is taken into consideration, but really that’s all it is. A consideration.

When you have a child with Autism, the system is different. And I mean very different. We’ll park the weight of responsibility I feel to get this decision “right” for a minute and talk about the process. We have just started down the road towards possibly getting Oscar an EHCP or an Educational Health Care Plan, or what used to be called a Statement. This process in itself is mind boggling complicated and takes months and months of preparation, including assessments by Educational Psychologists and the involvement of many other agencies. The back and forth and back and forth again (and if the stories are to be believed, again and again…) should, if all goes well, result in a legally binding document that means as a parent I can send Oscar to ANY school I believe is best for him. It also means that school has to provide the support he is legally entitled to. I’ll have all sorts of advice, from various assessments and agencies, to listen to and the professionals tell you it’s important you heed the advice. But then experienced Autism parents tell you that, really no one knows your child like you do, so trust your instinct when it comes to choosing the school, mainstream or specialist. Panic rising again!

Anyway, back to the school I looked at. It was a mainstream school, out of my catchment area, but one that’s given me huge amounts of hope. Its also made me want to look at other mainstream schools to see if they are all this attuned to SEN needs or if this really is a stand out school. The head also gave me some really useful advice about dealing with the ‘county’ and what I should be doing right now in order to get his ducks in a row for next year. She didn’t sugar coat how difficult the next year might be in terms of bureaucracy, which I was actually incredibly grateful for.

So today, as per her encouragement, I made a raft of chasing calls and I kept a log of who I rang and what was said. I was dismayed to hear that he STILL hasn’t been assigned a speech and language therapist, despite being on the list for over a year and a promise six weeks ago that sessions would start in July, but not surprised. I had a good conversation with his Early Years Advisor and found out that his preschool notification has definitely been issued. That ball is well and truly rolling.

So I’m feeling slightly more focussed now. I need to make appointments to go a see other schools, including some specialist schools. At least we can’t afford private, so that narrows the field a tiny bit. Every cloud! Once I’ve looked around some more schools, I’m hoping it will mean I can listen to all the advice and trust my instinct. The panic has abated.