It’s nearly summer. Hooray! If there’s anything I love more than the sun making an appearance, it’s being able to throw off the socks. Boots be gone, summer’s here and I’m cracking out the sandals. Mules, flip flops, reef sandals, I love em all. I love painting my toenails and feeling the air under my soles. Yes, summer truly is my favourite footwear season.

Only, it’s not an easy season. Every summer, since I’ve been able to afford them, I’ve worn Birkenstock single strap ‘Madrid’ mules. I love them. I love the look, I love that they go with anything, I love that you can just slip them on. I’ve owned several pairs over the years. My first were a rather natty silver, but since then every pair I’ve had has been white. Every year I think of moving onto a different colour and every year I can’t help but go back to the simplicity of the fresh looking, summery white. 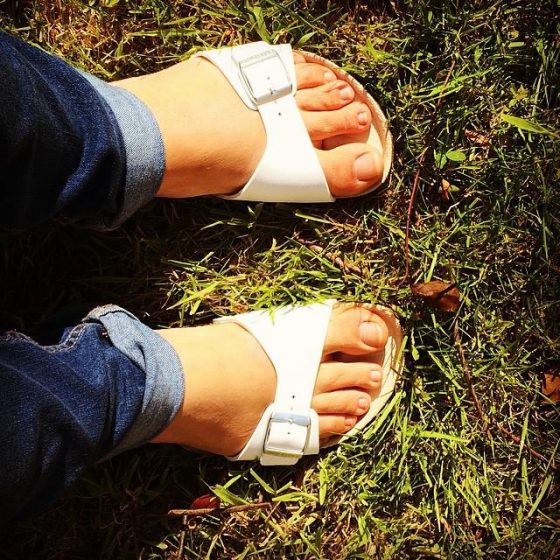 And yet every year, without fail, regardless of whether I’m wearing last year’s sandals or a box fresh pair, they give me blisters. Every summer, my poor big toes are shredded and the bridge of my foot has a 3 inch rub line. It’s to do in part with the fact that I pronate (roll in) when I walk. I know that. But it doesn’t stop me. I love them. So I just have to push on through.

The summer starts in pain. Blisters and friction burns and spending more on plasters than the shoes! But eventually the skin toughens up. The blisters heal and I suddenly realise I can wear them without half a roll of micropore tape strapped to my feet and finally summer is truly under way.

Until Autumn comes, the weather changes, and the socks go back on, undoing all that hard work. And next summer I know I’ll have to start all over again. Because despite the pain and the blisters and the fuss and the mess, I’m never going to give up my beloved sandals.

Perhaps I should just buy shares in Elastoplast next summer?

We moved into our house in 2011, just after I found out I was pregnant (and I mean literally. We signed the contract on the Thursday and I found out the following Tuesday. That sort of ‘just’). Anyway. We’d bought the house with all sorts of grand schemes of how we’d like to decorate and things we’d like to do and within days every plan got put on hold, as all finances had to be focussed on baby stuff instead. We did get Oscar’s room painted (I just couldn’t live with the highlighter shade of fluorescent pink the previous owners had for their little girl) but that was pretty much it. We’ve lived here three years now and actually the fug of new baby is lifting and we’re starting to see (read: get bloody annoyed with) the bits around the house that really could do with, well, doing.

Don’t get me wrong, we’ve done a couple of odds and sods around the house. We have shelves in the kitchen where none used to be and a mantle piece fitted that everyone who visits comments on and loves. We even have a new deck recently built by Ben and some of our manliest friends in a weekend. But we haven’t done any real decorating and to be honest there is so much that could be done that it was hard to know where to start! Anyway a few months ago we decided the only room in the house that had been shown no love at all since we moved in was our bedroom, and actually of all the rooms in the house, this one needs some serious TLC. The plaster is old and I mean really old and has been patched, badly, over the 100 odd years the house has been standing. The carpet is OK, but not fantastic and the wardrobes, which have cleverly been built over the alcoves either side of the chimney breast, aren’t actually that pretty to look at and, in my opinion, far too dark a colour for the space. And by space I mean lack of space. I mean it’s not minuscule, but once you add our king size bed and our ‘bought on the hop in the absence of anything else 8 years ago’ Ikea drawers and bedside tables then it’s not great. So we’ve decided to gut the entire room and start again, hopefully making more of the space available.

Which was fine, until I realised I had to arrange it all. It’s a proper project to manage, with time pressures and all sorts. We knew we wanted to remove the inordinately large radiator for good (we don’t use the heating now we have the log burner) and add more power sockets to the room (I’m sorry but four is just not enough for any modern household). Getting that sorted by the respective tradespeople was easy. It was the co-ordinating the plasterer with the decorator I was having a problem with. Thank god I managed to find someone who does both and can co-ordinate himself! We’re also having the wardrobes ripped out (hooray) and rebuilt by our friend Richard and will include drawers, so the Ikea delights can go to the tip. I’m so excited to see it all come together that I almost don’t feel the fear of having to completely clear the room and deposit the stuff we remove around the rest of the house for as long as the refurb takes. Almost.

So anyway the only decision I’m having to make the moment is the colour of the walls and my god am I struggling. The trouble is I know what colour I want. I just can’t find it. The house is awash with colour charts and the walls have various tester patches, none of which are right. I had the same problem with my bridesmaid dresses. I want green. How hard can it be. Oh you’d be surprised.

While we’ve got the decorator on site, we’re also going to have the front door and outside windows stripped and painted. I can’t bloody wait. They’re an absolute disgrace and I’m sure having them done will stop us being the scruffy herberts of the street (we really are!). The windows will be white and the door a Farrow and Ball colour called Chappell Green. Lovely. Well that was easy enough to chose. So why can’t I find the bedroom colour?

In my mind, it’s going to look something like this. Green, with lots of white woodwork, only with a slightly darker floor – if I can ever find the paint I want!