There just seems to be so much negativity all over social media at the moment. So here’s Our Favourite Five for July to try and redress the balance!

We love Dyson in our house. We’ve never owned any other brand of vacuum in 18 years of adulting together! Despite our last purchase (an Dyson Animal D23 we bought in 2010) still going strong, our lives have changed significantly in the 6 years since we got it. We’ve gone from a professional couple in a one floor apartment to a young family in a three story period cottage. Think steep stairs. Lots of ’em. Anyway I’ve been lusting after a cordless Dyson for a few years now. They just made so much sense to me. However Ben wasn’t convinced they’d be good enough for cleaning a whole house, or to be fair, that the whopping price tag was worth it, especially when we already had a machine that worked well enough. However, things they are a changing round Casa del Savage at the moment. With Oscar starting school in September I decided that a cleaner was no longer going to be a weekly expense I could justify, meaning I was going to have to go back to cleaning myself. Meaning I needed a decent machine, fit for purpose. And not one I was afraid would fall on my head every time I vacuumed the stairs.

Ben finally capitulated in July and we got a Dyson Cordless Absolute V8. And it’s already changed the way we clean the house. It’s just so easy to grab at the end of every day when we put Oscar’s toys away and give the tiny downstairs a once over before we sit down to our evening. Or should Oscar (or myself to be honest) make a mess in the day, it’s just so quick to grab and sort out. The battery is fabulous and I’ve done the entire three floor house on one charge (the battery only drains while you pull the trigger, so in between rooms it’s saving all the energy it can – clever!) It makes me sad that we didn’t have something like this sooner. It would have been a boon when Oscar was weaning!

And Ben is also completely sold. He’s just as happy to grab it and spend  the two minutes it takes to clean the downstairs as I am. Thank you Dyson for giving all your cleaners the look and feel of military hardware (at least in my husbands eyes!)

You may have read my previous post about the Thai Street Food restaurant Thaikhun earlier this week. I took Oscar and you can read about my thoughts on the eatery from a parent’s perspective in my review. However at the end of July, I decided to do a really nice thing for some of my mummy blogger friends who have helped and supported me recently. So I arranged an End of Term celebration at Thaikhun Guildford for us all. I wanted us to breathe a sigh of relief that we’d made it to the end of term and take a steeling breath to prepare us for the holidays! And what better way to do that than get the ladies together and have cocktails and wonderful food in a really fun location? Thaikhun were kind enough to host and we can’t thank them enough!

We started the evening with spicy crackers and cocktails! Elfa from Californian Mum in London and I began with a Thai Takeaway – not dinner but a cocktail in a box! Then the non drivers among us moved on to drinks in a bag! Seriously, a bag!

The four of us then had starters. Maria from Suburban Mum won that round with the most gorgeous looking Tempura Prawns! And I would have to say I won the mains round with my beloved Moo Prik King – Pork Belly in Red Curry Sauce, but then I am a bit biased! We talked and laughed and talked some more. When I told the girls about the worms they’d given Oscar and I, Elfa insisted we get our own to try! We had such a great night and we would like to thank Thaikhun Guildford for being such wonderful and accommodating hosts. I’d also like to say thank you to the girls for coming from all over Surrey to join me and especially to Alice from Three Men, a Little Lady and Me for giving me a lift. Thaikhun is the best kind of place for a girlie night out with your chums, we had a super night!

Oscar’s been a die hard fan of Thomas the Tank Engine for a long time now, but has only just recently started to look at modern trains with an understanding that they are also trains. Until recently we’d avoided taking him on a train ride as A) we weren’t sure he’d enjoy it or B) that he’d be able to sit for any length of time. However, he’s recently become much better at following instructions and using public transport without the buggy (we’ve been walking and getting the bus for preschool every day in July). So a couple of weeks ago we finally decided to give it a go. And he LOVES it. I mean LOVES it. From buying the ticket, to the waiting on the platform to riding on the actual train, he gets so much out of it. It’s also opened up doors for days out that we just didn’t have before. 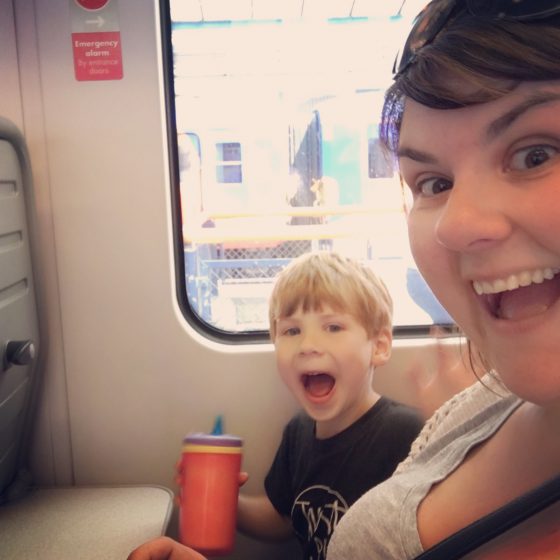 We also love the one of the ticket staff in Haslemere Station. She very kindly made Oscar his own special ticket, when she saw how excited he was at going on a rail journey. She didn’t need to do that and it really touched me! Thank you South West Trains ticket lady! 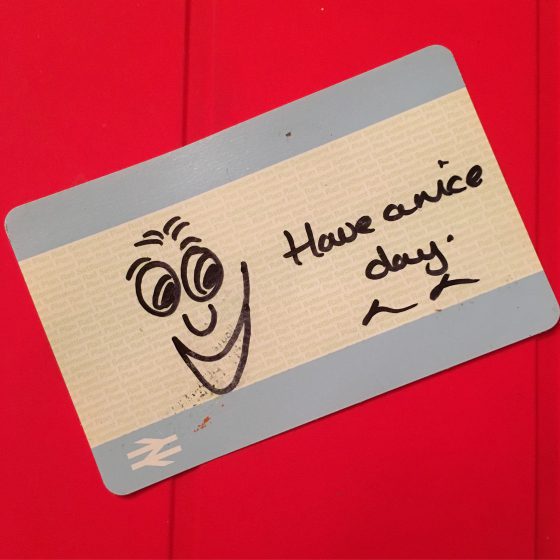 I love berries and there really is no better or fresher way of getting them than picking your own. We’ve not gone for a few years, as Oscar has struggled to cope with new places and not running off, however this year we thought it was time to try again. So a few weeks ago we took him to Secretts Pick Your Own in Milford. And what can I say; he amazed us! Awesome at picking the best looking strawberries, he enjoyed it so much we ended up with an enormous bucket full! Although no need to worry, Strawberries are Oscar’s favourite and they all got eaten! We came back with Raspberries and Strawberries and Rhubarb and even Sunflowers. Such a fun day out and such good value too! No way could you buy as many berries for the price of pick your own in the supermarkets. And the taste? I swear it’ll catapult you back to childhood.

We’ve been to Marwell Zoo a few times now. Oscar likes it there, but for the most part I haven’t enjoyed our trips. I think its primarily because I have found it so hard to deal with the fact that Oscar is accessing the park in a completely different way to how one would expect a child to access a Zoo. He hasn’t ever really showed much interest in the animals and has always just run from one thing to the next. It’s been exhausting and also made me feel like we could be anywhere, a park near the house would be giving him as much as a Zoo an hour away. However, this time we went I was more prepared to let him go where he wanted and do what he found interesting. And yes much of that was the play parks around the Zoo, but he also LOVED the train that went round the park and he did actually start to pay attention to the animals (He loved the giraffes). The best bit was that this was the first visit where we didn’t leave with him in mid melt down!

It wont always be a great day out, I get that, but this time really was. And I think that was largely down to me managing my expectations and coming to terms with who he is.

What were your favourites last month I’d love to know!

I would like to thank Thaikhun for their hospitality and hosting our Mummy Bloggers End of Term Celebration.

I paid for my Dyson myself. Well Ben did. But you know what I mean! As always all opinions are my own.