The terrible twos. They really are terrible. In fact, I’d go as far as to say they suck. Big time. Not just for me, but for him too. We had something of an epic fail in the past week, one behavioural disaster after another. Some weeks are just like that I guess. It started with a return to toddler group after the summer break. Hammer is big, it’s noisy and it’s busier than a branch of Next on the first day of the sale. It’s full on, always has been. In the past he’s been OK with it, sometimes good, sometimes not so good. Last week was not a good week. Then there was a failed trip to the Hen House. Meh, it happens I guess. It’s this ‘pushing’ phase that’s doing my nut. I know it’s his way (whether right or wrong) of expressing himself (“you’re in my space/touching my stuff/touching stuff I deem to be mine because I glanced at it 20 minutes ago and I don’t like it”). It’s not malicious. But other people don’t see that. They just glare and in some cases admonish me for his behaviour. His speech delayed, frustrated, two year old behaviour. Sigh.

So what do I do? Seriously? Much of the advice given by official channels is to ignore bad behaviour (er not always possible, especially in public when it’s involving other children) and getting them to talk through their feelings (hmmm can we park that one for now?), in fact much of the advice just seems to be ‘well yeah, this is going to happen and you gotta ride it out best you can honey, sorry. We’ll talk again when he’s three, OK?’. My initial reaction on Friday was to never take him out again. Ever. Again. We’ll just stay in I thought. He wont meet other children, but that way he can’t push them (his modus operadi) and no one will look at me like I’ve pissed in the punch!

I’m not serious of course. What would that teach him? Nada, nothing, zip! I know that really. Just some days, I feel like I’m walking a tightrope. Blindfold. With my hands tied behind my back. Whilst reciting Chaucer (I really hated Chaucer at A’level). Sometimes I’m just so tired to my bones with all this worry and indecision and feeling just not quite good enough, that the path of least resistance just starts to look mighty appealing.

Yeah, the last week was not a good week.

But then, actually, wasn’t it? Thursday, Friday and Saturday could have been better. Sure. Things could have gone more the way I wanted them to, but ya’ know, no one died. And Sunday’s trip to Alice Holt and Tuesday’s trip to The Hen House, whilst embarked upon with gritted teeth, worked out amazingly well. No pushing, minimal squealing, making friends and laughing like a loon (him not me. Well a bit me 😉 )

And then there’s the speech. The delay in Oscar’s speech is, I feel, impacting greatly on his behaviour, but guess what? Those pesky little words are starting to emerge. Slowly, and in a really peculiar order, but in the last week my boy suddenly has something of a vocabulary. It’s a mixtures of single words like ‘ready’, ‘water’, ‘more’ and ‘flower’ and then even some short phrases like ‘another one’ and ‘I don’t want to’! Whether they ‘stick’ and he continues to use them regularly is yet to be seen (apologies for my cautious tone, but we’ve been here before. Said bear four times in one day, never said it again) but in a week when everything was dreadful, actually it wasn’t at all. He even has a name for me now! I’m Nuhnuh. Just when you think it couldn’t be worse, it suddenly isn’t. That’s the twos for you. 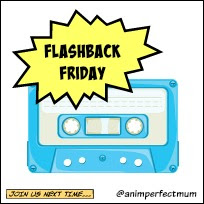